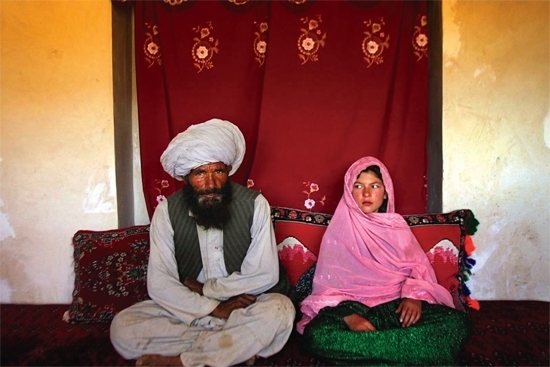 Once again, a wholly reasonable attempt by lawmakers within Pakistan have failed to pass a law banning child marriages. It was an initiative by Marvi Memon, a member of the ruling Pakistan Muslim League, to improve existing child marriage legislation, but she has now been forced to withdraw the proposal.

One word – Religion, or to be a tad more specific, the CII … again.

Pakistani lawmakers had to withdraw a bill aimed at curbing the practice of child marriage after a prominent religious body declared the legislation un-Islamic.

The bill, which proposed raising the marriage age for females from 16 to 18, also called for harsher penalties for those who would arrange marriages involving children. Despite the laws in place, child marriages, particularly involving young female brides, are common in parts of the country. It’s estimated that some 20 percent of girls in the country are married before they turn 18.

But the Council of Islamic Ideology, a constitutional body which gives advice to parliament on the compatibility of laws with Sharia, appeared to slap down the legislation after deeming it “un-Islamic” and “blasphemous,” according to Agence France Presse.

Today the practise of forced early marriages of young girls is still widespread in Pakistan and is perhaps driven by the desire to get them married off as quickly as possible before some transgression can occur that would bring dishonour to the family. The net effect is that not only are many being married off forcefully against their will, but they are also being placed within a situation where their education has ended and so this leads to a high level of illiteracy amongst such girls.

The issue has deep historical roots, it was Jinnah himself, the founder of Pakistan, who passed the 1929 act that set the current legal limits at 18 for boys and 16 for girls.

Social Reform vs The Islamists

Human rights matter, and one important aspect of that is pushing hard for social reform, so when that progress is being hindered then it is perhaps important to turn our criticism upon those who are standing in the way of such progress and crank up the audio of our criticism to full volume.

If indeed the CII council of clerics had been granted the power to veto such legislation then there would need to be some serious consideration given to removing this body from the entire process, but the reality is that they are there to only recommend and do not have the legal power to actually veto anything. So how then have they actually been granted such influence?

What is quite frankly shocking is that they did not simply wish to comment upon the proposed proposed legislation and make a recommendation, but instead wanted to go a a lot further and even see the 1929 act overturned. They have managed to extend their influence by issuing threats of real violence, and that is simply not acceptable.

Key Point: The CII, the council of clerics, is operating way beyond their remit.

Perhaps the next bit of legislation that desperately needs to be put into immediate effect is to formally disband and remove them from the entire process, especially when they are now the primary barrier to basic human rights.

According to traditional Islamic sources, Mohammed, at the age of 50, married a 6 year old, and so when you embrace the idea that he was the perfect man, one to be emulated, then you find within some of the various strands of Islamist practise today middle aged men marrying very young girls.

I’m not suggesting that we now embark upon a flame-war in the comments section regarding what Mohammed might or might not have done, but am instead simply pointing out what is believed by millions today. This rather bad idea is apparently beyond criticism and leads to some rather obnoxious outcomes, and so if you do indeed wish to quibble about what Mohammed did or did not actually do at the age of 50 with a 6 year old bride, then it is not me that you should talk to, instead it is a conversation that you really should have with the millions who truly do believe it and put it into practise.

There is a dire need, not just for better legislation, but for the overturn of some truly morally repugnant Islamist ideas that belong in the 7th century and not the 21st.