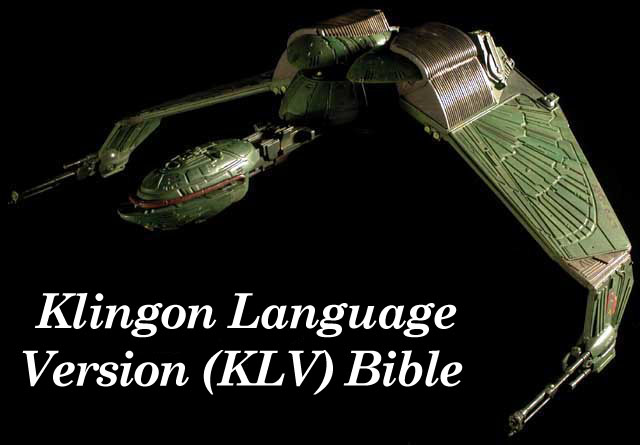 OK, so I’m not really pondering the concept of salvation for the Klingons, but rather I’m mulling over what the discovery of alien life will do to existing religious beliefs. I’m not the first to think such thoughts, because Scientific American talked to Vanderbilt University astronomer David Weintraub, the author of a new book – Religions and Extraterrestrial Life: How Will We Deal with It? (Springer Praxis Books, 2014).

Yes, you can of course take the idea of salvation as a bit of human centric nonsense, so we are not really considering the idea itself as a concept that describes anything that is actually real, but rather recognising that the discovery of aliens would clearly impact existing cultural beliefs.

So when interviewed here is what came out …

Which religion will have the toughest time reconciling aliens with its beliefs?
The ones that have decided that we humans are the sole focus of God’s attention.

Indeed yes, and we can see how it would play out as well, the number one goto position when faced with stuff that conflicts with a belief is denial, we have all seen it. For example the “No evolution is just a myth” / “The earth is really only 6,000 yes old” assertions, and so if we did indeed detect life, it would simply be rejected as a lie by some. If in fact they arrived and landed on the White House lawn then it would simply be a “Media Conspiracy” or a “Lie of the Devil”, or if you were Muslim, “Jinn directed by Shaytan to deceive us”

Which religions are more open to the idea of alien life?
Asian religions for the most part are easily accommodating. In Buddhism, for example, there are lots of worlds. Reincarnation is an important part of that view of life.

Humans may indeed by highly intelligent, but at the same time can also be utterly irrational, and so it is indeed quite probable that older beliefs that have been around a bit longer have persisted because of the ability they have to adapt to a changing knowledge environment. Highly intelligent individuals may not necessarily abandon absurd ideas when faced with new information, but will instead embrace such new ideas and graft it all into the preexisting belief. For example Catholicism today will happily embrace evolution as a scientific fact and simply add a “That’s how god did it” caveat, and will also happily apologise to Galileo, and so I suspect many beliefs would adapt in a similar manner. In fact, what comes next is an example …

You write that the Roman Catholics have a particular issue when it comes to extraterrestrials. What is their viewpoint?
Original sin is an important idea in Roman Catholicism. The idea that Adam and Eve shouldn’t have eaten the apple—they committed a sin and that’s how sin entered the lives of humans. Jesus’s act of dying on the cross was to redeem all humans from that original sin, to allow us to get to heaven.

Let’s say you discover some aliens on some other planets and you decide that you should convert them to Christianity. A reasonable question should be why? If they live on planet Earth, they could be descendants of Adam and Eve but if they are Klingons living on planet whatever, they couldn’t suffer from original sin because they’re not descendants of Adam and Eve. Christianity would make no sense for these creatures, unless our understanding of original sin makes no sense.

Roman Catholic theologians are starting to rethink that in light of the possibility that there could be living beings on other worlds. The idea of original sin may be recast not as sin that comes directly from a literal Garden of Eden and a literal Adam and Eve but that original sin somehow simply exists in the fabric of the universe.

… and so they are already positioning themselves to adapt so that the belief can still thrive.

When you hold irrational ideas, then you will eventually find that at some point things begin to unravel, but often the solution to such challenges is to simply make up more bullshit so that the currently existing bullshit can be retained as “truth”.

Perhaps a great example of this is the Islamic concept of ramadan – the idea is that you fast from sunrise until sunset for 1 month, and that works just fine as long as you reside near the equator … oh but wait, near the poles during the summer where the sun does not actually set, then you are indeed a tad scuppered, so what to do? Easy, simply find some cleric to declare that you don’t go by local sunrise/sunset, but instead revert to the time of sunrise and sunset in Mecca or some other similar solution. How that is then supposed to work on trip to Mars I have no idea, but I’m sure some cleric will either dream up a solution or alternatively go for an easy out and declare trips to Mars to un un-islamic and haram.

Trip to Mars haram … would a cleric really do that?

Sure, in fact it has already been done.

Belief once proclaimed that we were truly special and at the centre of everything, but as time has passed beliefs have come to terms with the revision of such thinking …

So no, we are not in any way special at all.

As for sending missionaries to convert the aliens, I suspect the vulcans will simply declare it to not be rational and the Klingons with not verbally comment, but will instead simply express their opinion of it all with a bat’leth.