Yep its that glorious once in a decade UK moment when we all have the joy of filling in the census forms that allow us to declare our details for future historians to churn through and turn into a Ph.D or two. To translate, its the moment when vast swathes of the UK population declare themselves to be Jedi Knights.

Now least you wonder about this and don’t understand, but instead scratch your head muttering WTF, well let me explain. Most normal populations have folks who simply tick the “No Religion” box, but here we delight in doing what is best described as “talking the piss” out of this entire process.

Back in 2001 during the last UK census, over 400,000 people declared themselves to be Jedi. The net effect is that its now an official UK religion, and not just a tiny one, but the fourth largest, bigger than Judaism, even bigger than Buddhism.

Its caught on, others are at it now. Here is a link to a site in NZ that encourages folks there to declare their Jedi faith. They explain …

Make sure you answer the religion question correctly. The NZ Census bureau believe that the Jedi answer means “Response outside of scope” or “Answer understood, but will not be counted”, whereas “satanism”, “wican”, “yoga” etc are valid answers. The sheer number of people who entered “Jedi” was a significant in the last census, approximately 20000 in NZ alone (indicative result given confidentially). I note there were more Jedi’s than Assembly of God, or Jehovah’s Witnesses.

In order for the Jedi church to grow, we need access to these statistics just like any other church/order. In the UK the number of people who answered Jedi, were greater than many other common Christian denominations. In fact, in the UK, 2% of people in Brighton are of the Jedi Faith.

It is not against the law to answer Jedi, you are welcome to have any faith you wish. It is the governments responsibility to accept our faith and accurately record the statistics.

Now normally, there is a legal obligation to accurately fill in the census form, but that does not apply to the infamous religious Question 10. Section 1(2) of the Census (Amendment) Act 2000, which amended section 8 of the Census Act 2000 to state that “no person shall be liable to a penalty under subsection (1) for refusing or neglecting to state any particulars in respect of religion“. The change in the law was implemented by The Census (Amendment) Order 2000

Apparently we even have Jedi politics taking place. In June 2005, Jamie Reed, newly-elected Labour Member of Parliament for Copeland in Cumbria, declared himself to be the first Jedi Member of Parliament during his maiden speech. The statement, made in the context of an ongoing debate regarding the Incitement to Religious Hatred Bill, was confirmed by Reed’s office to be a joke instead of a serious statement of faith. Nevertheless, during a subsequent Committee debate on the Bill, the Conservative Member of Parliament for Beaconsfield, Dominic Grieve, sought to exclude Jedi Knights explicitly from the protection of the proposed Act. Similarly, in April 2006, Edward Leigh, the Conservative Member of Parliament for Gainsborough, asked whether he would be allowed to set up a Jedi knights faith school during a Committee debate on the Education and Inspections Bill. 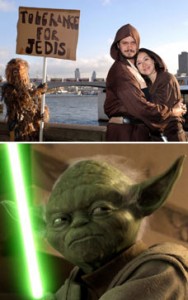 On November 16, 2006, two Jedi delivered a protest letter to UN officials in recognition of the International Day for Tolerance. They requested that it be renamed the “UN Interstellar Day of Tolerance” and cited the 2001 Census showing 390,000 Jedi in England and Wales

So when census time comes around, here now is your opportunity to not only mock both the census and also religion, but with one very simple tick on an official form declare that religious belief should play no part in any government policy.

Of course, all this does cause me to ponder over it and wonder how many of these folks are proper “Jedi Order” knights and how many are “Dark Siders”, so perhaps we need a Jedi census to find out.

If you are looking for further links, then …

OK, one final sanity note – Governments have zero sense of humor. No really, public officials have to declare themselves to be completely satire free, so you just might be better off ticking the “No Religion” box. Why? well the true insanity here is that they really do use the data gathered about peoples irrational superstitious beliefs to justify funding for religious community bodies over secular ones

2 thoughts on “Are you a Jedi knight?”