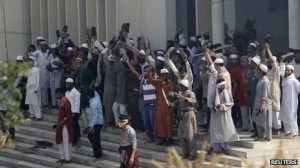 At least four people have died in Bangladesh in clashes between police and Islamist protesters who took to the streets accusing bloggers of blasphemy. Dozens more were reported injured.

Some were calling for the execution of the bloggers, whom they accuse of insulting Islam.

The protests come days after authorities blocked some websites for “hurting religious feelings”.

Yep, way to go guys, somebody blogs something you don’t like, so the “obvious” solution is to go out riot and call for the bloggers to be murdered.

What makes this truly appalling is that this is not just an incitement to murder, but this seething mass of irrationality has already murdered.

So what is going on here?

The root cause of all this strife stems back to 1971, a horrendous time when the Islamists were responsible for the murder of hundreds during the war of independence. Last week, Bangladesh’s parliament amended a law which will allow the state to appeal against the life sentence given by the tribunal to an Islamist party leader.

In recent weeks a group of bloggers, including Mr Haider who has now been murdered because of what he blogged, had launched mass protests demanding his execution and a ban on the country’s largest Islamist party, the Jamaat-e-Islami. I don’t personally agreed with the death penalty, but I understand the demand for justice.

What is also not immediately clear is that within Bangladesh there is a revolution that is now taking place. The BBC reports on the rioting Islamists, but has remained silent about the hundreds of thousands people from young men and women, aging former guerrilla fighters and grandmothers who still carry the scars of violence, have occupied the Shahbag Square in Dhaka, Bangladesh for the past two weeks. 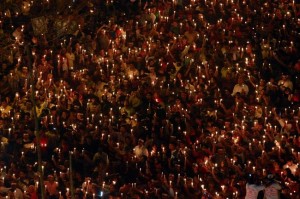 The roots of this resentment lay in the genocide of the Bengali people that started in March 1971 by the Pakistan Army and its accuses jihadi collaborators, the mullahs of the Jamaat-e-Islami. The military-sanctioned massacres did not stop until nine months later in December that year when the Indian Army intervened and the Pakistan military promptly surrendered.

From the ashes of a war and three million dead people choking its rivers, the new country of Bangladesh emerged, but without its founding father Sheikh Mujib.

He was being held as prisoner and hostage by the Pakistan military. To secure his release, international agreements were brokered, which in exchange allowed for most of the collaborating jihadis to not face war crime trials.

It was not until 2008 when Sheikh Mujib’s daughter, the current Prime Minister Sheikh Hasina campaigned on the promise to set up tribunals to try the 1971 collaborators for war crimes. On that promise, she was swept to power with an overwhelming majority in parliament and in 2010 the war crimes trials finally got off to a start.

Among the first to be convicted was a senior leader of the Jamaat-e-Islami, Abdul Quader Mollah. But instead of the death sentence, Mollah was given life imprisonment with possibility of future pardon. Hearing that his life had been saved, Mollah turned to the news cameras and with a huge grin on face, waved a victory sign to the crowd.

While the bearded Mollah was ecstatic, liberal and secular Bangladeshis were enraged. How could a man pronounced guilty of war crimes, accused of raping and shooting 344 civilians to death during the 1971 war, not receive the maximum punishment, the death sentence?

Within hours of the judgement, which was handed down of February 5, ordinary students and bloggers used Facebook and Twitter to rally their contacts. Soon an impromptu gathering of hundreds, then thousands and soon hundreds of thousands collected at Dhaka’s Shahbag square.

For 15 days, they have been there and despite the gruesome murder of one of the leaders, they have kept their movement peaceful.

Now comes the key sound bite … the core of what is going on … so this is where you need to sit up and pay attention ….

For the first time ever in the Muslim world, there has been a popular uprising against the fascism of Islamist parties.

Indeed yes, this is a key moment in history. As noted by Taslima Nasreen, the award-winning writer, physician, secular humanist and human rights activist …

I support the banning of Jamaat-e-Islami. In Bangladesh, it is nothing but a terrorist organization. The religious terrorist organizations should be banned if we want true democracy, human rights, women’s freedom and freedom of expression.
The Shahbag movement should be led by secular progressive people. If the political parties hijack the movement, they will definitely ruin it. All the political parties in Bangladesh made the fascist Jamaat-e-Islami their allies in the past. It is foolish to trust them.

It is indeed time for the people of Bangladesh to rise up and put aside the ignorance, superstitions, religionism, fanaticism, fascism, barbarism, and make it a country without crimes and corruption. The Islamic lunatics fear this, and so far the only response they has had is rioting and murder. But the people of Bangladesh no longer want to wallow in ignorance and superstition, that is why hundreds of thousands peacefully occupy Shahbag Sq and refuse to be intimidated by the murder of their leaders.

“Theirs is a grassroots uprising for the most essential and neglected values of our age: secularism, the protection of minorities from persecution and the removal of theocratic thugs from the private lives and public arguments of 21st-century citizens” – Nick Cohen writing in support of the Shahbag protest.