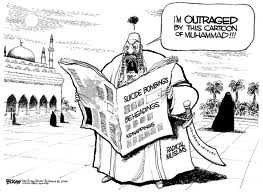 Baroness Warsi, the UK’s Tory party chair, deplores what she calls dinner-table Islamophobia and claims that anti-Muslim bigotry is commonplace around British dinner tables. She also suggested that followers of Islam should not be divided into “extremists” and “moderates”. (You can read about her claim here)

OK, whats wrong with this? think about it for a moment … then read on.

Lets take a specific case to illustrate my concern. We have the recent pointless slaughter of an honourable man and a great human being, Salman Taseer … his hideous crime … he opposed a Blasphemy law in Pakistan that was being used to persecute minorities. His murderer is hailed a hero … the lawyers shower him with Rose Petals … He boasted, as “a slave of the Prophet,” he had the natural right to murder Salman Taseer, the governor of Punjab, not even for committing “blasphemy” but for criticizing a law that forbade it for Muslims and non-Muslims alike. And this sweeping new extension of the divine right to murder not only was not condemned by the country’s spiritual authorities; it was largely approved by them. No argument, no arraignment, no appeal—permission to kill anybody can merely be assumed by anybody, provided only that they mouth the correct incantations.

Now ask yourself this … should I fear the term “Islamophobia” and refrain from any criticism of the belief system that motivated, not only this murder, but also motivated many to feel it was a good thing? In fact, the thought of not being critical of this belief-driven insanity is quite repugnant, its demands that we shout about this injustice.

Where Baroness Warsi has gone way off course is that it truly is quite appropriate to be examine and to be critical of any and all belief systems, and to openly condemn basic human rights abuses that are committed in the name of God.

To label this “Islamophobia” is completely inappropriate because it implies such criticism is some form of racism, or bigotry.

When faced with the term “Islamophobia” … be skeptical.

But I’m not worried about the general character of the Brit. We are OK. We are basically nice, clumsy, polite and well-meaning people. It’s the fringe loonies you have to worry about.