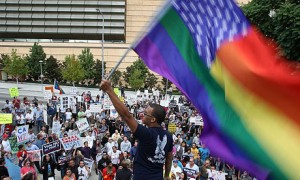 As always, its the folks who cling to ancient texts that strive to keep us all chained in the dark ages. With the pretense of preserving morality, hate groups like the National Organisation for Marriage (Nom), has spent tens of millions of dollars as they strive to suppress basic rights from so many Americans. Now Obama has stepped in and proven himself to be a true equal rights reformer.

Today in The Guardian Fred Karger writes about this, and explains …

The opponents of equality for all Americans lost big on Wednesday with the announcement by President Obama that he has decided that the so-called “Defence of Marriage Act” (Doma) is unconstitutional – and his administration will no longer defend it in federal court.

As you might expect, the Luddites are thrashing about in panic mode and screaming foul …

Nom sent out an urgent fundraising appeal as soon as the news came out that said, “It’s a constitutional outrage. Why do we even have courts if the president himself gets to decide which laws are constitutional?”

The independent court system in this country is working just as our founders designed it to, 235 years ago. The judiciary is supposed to protect the minority from the tyranny of the majority. The courts have led the way on civil rights throughout our history.

This is a huge step for an administration that has previously upheld Doma as constitutional. It sends a powerful message that discrimination based on sexual orientation has no place in this country.

Its not a done deal yet, the Supreme Court will still have to find Doma unconstitutional, but the support of the administration is still a huge leap forward for liberty and equality for all.

Today we look back and see the immorality of slavery, yet in its time many supported it and resisted its eradication. I suspect that 100 years from now, people will look back in a similar manner, scratch their heads, and puzzle over the mentality of folks who are so deluded, so steeped in superstition, that they actually resisted the move to step forward and grant true equality to all.

1 thought on “Gay marriage decision: a blow to the enemies of equality”