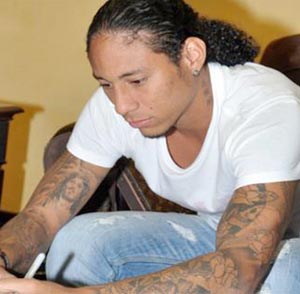 Colombian footballer, Juan Pablo Pino, who plays for the Saudi Al-Nasr  club, has upset shoppers when he appeared bare-armed in a Riyadh mall. If you look at the picture here you can see the problem (for them), it’s the face of Jesus on his right arm.

So what happened? In a theocratic regime that dictates what you can and cannot wear I’m sure you can guess.  Sure enough, the news here, is that the “offended” shoppers called in the local religious fuckwits (known as Commission for the Promotion of Virtue and Prevention of Vice) and rapidly detained Juan along with his wife.

“They then put him and his wife in their car and waited until officials from Al-Nasr club came and sorted it out…Pino and his wife were handed to the club officials after a brief detention,”

So what next? Well his wife quite rightly wishes to vote with her feet and abandon this kingdom of religious nutters:

Following the incident on Friday, Pino’s wife is living in a state of anxiety and is demanding that she and her husband leave Saudi Arabia…Al Nasr club has asked its Argentine coach Gustavo Costas and his wife to try and persuade Pino’s wife to change her mind but their attempts have been futile.

I for one do truly hope he supports her.

In response to all this, Saudi Arabia’s religious police have told foreign players with tattoos on their arms to cover such drawings while on the field, saying, “they are adversely affecting young Saudi” … really, exactly how?

Incidently, this is not a first, there was a similar incident in Saudi Arabia last year when Romanian player, Mirel Radoi, set off public outrage by kissing his tattoo of a cross after scoring a goal.

It is of course fine for people to believe whatever they wish, no matter how irrational it is, but what you don’t get to do is to impose it on others.