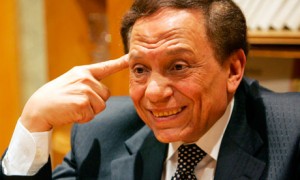 has been  sentenced to three months in a case brought by a lawyer with ties to Islamist groups that are gaining power in post-Mubarak Egypt.

The details are as follows:

One of the Arab world’s most famous comic actors Adel Imam has received a three-month jail sentence for insulting Islam in films and plays, a court document has shown.

Imam, who has frequently poked fun at authorities and politicians during a 40-year career, has one month to appeal and will remain free until that process is concluded.

The case was brought by Asran Mansour, a lawyer with ties to Islamist groups, judicial sources said. The sentence on Thursday came weeks after Islamists won most seats in a parliamentary election.

Mansour accused the actor of offending Islam and its symbols, including beards and the jilbab, a loose-fitting garment worn by some Muslims.

Oh the horror, such deeply immoral crimes … “making fun of people wearing beards and the jilbab” … gets you three months in jail!!! Its not a first, apparently Court cases against directors, actors, artists and intellectuals for failing to respect religious authority are common in Egypt. It is also not a first for him, he has a long history of legal tangles with Islamists who regard his work as blasphemous (hey, I like him even more now). What makes this stand out is not just the fact that Adel Imam is really a rather famous and popular comic actor in the Arab world, but the very timing of it as the Islamists gain power, and so the case is attracting a lot of attention.

In addition to being popular he is also a rather decent bloke. In January 2000, the United Nations appointed Emam as a Goodwill Ambassador for UNHCR. Since then, he has worked tirelessly for the cause of refugees.

So what exactly has caused all the fuss? The specific work that he faces jail for includes a 1994 movie al-Irhabi (The Terrorist), in which he portrays an Islamic fundamentalist, and the play al-Zaeem (The Leader), in which Imam pokes fun at the region’s autocratic leaders.

This is man who is not only a comic, and popular actor (with over 100 movies to his credit), but is also a symbol for people promoting tolerance and human rights. He is not afraid to confront, in a 1998 TV debate, called Star on a Hot Tin Roof, Imam squared off with three Islamists from the Muslim Brotherhood.

We all (I hope) are rather fond of comics, for they make us laugh at ourselves by pointing out and highlighting the truly absurd things we do. They are also in the rather unique position of being able to say things that might not be normally acceptable for anybody else to say. The best example of this is perhaps the court jester in King Lear who took advantage of his license to mock and spoke freely to dispense frank observations and highlighted the folly of his monarch.

To now turn around and attempt to gag the comic for simply mocking daft religious practises speaks volumes about the degree of insecurity that prevails within the belief system. But if you then silence that last voice of common sense, who then is left to speak the truth?