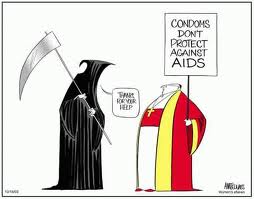 As I’m sure you are aware, there has been a bit of a media generated feeding frenzy regarding the apparent statements made by the pope on the use of Condoms. Has there really been a change, did something new happen?

What actually took place is that during an interview with a German journalist about his latest book, he said that while condoms are not the solution to the HIV/Aids crisis, there may nevertheless be individual cases where use of a condom can represent the first stirrings of a sense of moral responsibility, if the intent is to save someone’s life.

OK, lets translate this Catholic speak into plain English … “NOTHING HAS CHANGED”, their opposition to artificial birth control remains intact, so if someone were to ask a Catholic priest, “Is it okay to use a condom?” the answer is still “No.”.

The truly bizarre thing about this stance is that they claim that while the apparent moral driver for this is that sexuality should occur only inside marriage and should always be open to new life … the harvest reaped by this policy is excessive poverty and death for millions. Its utterly insane, yet when you consider that these are the same folks who truly believe that a magical incantation repeated over a cracker by a male virgin magically turns it into the actual flesh of a god for human consumption, then you might begin to appreciate that common sense plays no part here.

All we really have here is the following clarification. When a priest is faced with the question, “I’m HIV-positive and will have sex regardless of what the Church thinks, so is it better to use a condom to try to save lives?” the Pope has implied that a pastor might legitimately say “Yes,” while still stressing that condoms ultimately are not, as Benedict says in his interview, a “real or moral solution.” Also, as a get-out-of-jail-free clause, Benedict concedes within the same book that popes can have private opinions which are wrong, so until some formal edict comes down the pike, Benedict’s language has to be seen as interesting but non-binding.

So, in other words … its business as usual, the policies that promote intolerance, poverty and death remain intact. This has indeed been confirmed by the Vatican’s spokesman, the Rev. Federico Lombardi, who explained in a statement last Sunday that that Pope Benedict XVI said nothing “revolutionary” and is not “reforming or changing” the church’s stance on the issue, then went on to add that the church does not consider condoms to be the “moral solution” to the AIDS problem.

Its quite frankly a moral outrage that these supposed guardians of morality would rather see million die, and refuse to change their stance.

When faced with claims that Catholicism holds the high moral ground … be skeptical.