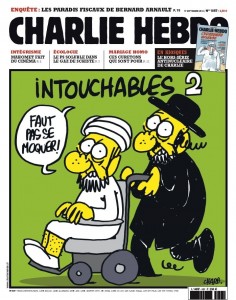 The French government has rapidly tightened up security at all its embassies around the world … why? Well because a French magazine, Charlie Hebdo, has decided to publish some cartoons of Muhammad. They know they are simply provoking the islamic community so why would they do it? Well, perhaps because some fanatical Muslims fire-bombed their offices last November.

The cover (pictured) shows a Muslim man in a wheelchair pushed by an Orthodox Jew with foil cap and under the title “Untouchables 2”, an imaginary sequel to a recent French film. The pair are saying (rough translation) “You must not mock us!” According to Le Monde, there are more shocking cartoons of the Prophet Mohammad inside the magazine “in daring positions”. And sure enough, inside they have a naked Muhammad, so I guess the fire-bombing really pissed them off.

The Guardian reports on how some have responded to this …

France’s prime minister, Jean-Marc Ayrault, said in a statement: “In the current climate, the prime minister wishes to stress his disapproval of all excesses and calls on everyone to behave responsibly.”

Questioned on RTL radio, he added: “We are in a country where the freedom of expression is guaranteed, along with the freedom to caricature. If people really feel their beliefs are offended and think the law has been broken – and we are in a state where the law must be totally respected — they can go to the courts.”

Others are also quoted …

Essam Erian, the acting head of Egypt’s Muslim Brotherhood’s Freedom and Justice Party, said the French judiciary should deal with the issue as firmly as it had handled the case against the magazine which published topless pictures of Kate Middleton.

“If the case of Kate (the duchess) is a matter of privacy, then the cartoons are an insult to a whole people. The beliefs of others must be respected,” he told Reuters.

Mahmoud Ghozlan, a spokesman for the Muslim Brotherhood, said that French law should deal with insults against Islam in the same way as it deals with Holocaust denial.

“If anyone doubts the Holocaust happened, they are imprisoned, yet if anyone insults the Prophet, his companions or Islam, the most (France) does is to apologise in two words. It is not fair or logical,” he said.

OK, there are a few points to address here.

First, the claim that they should not provoke by publishing is akin to telling women who get attacked that they were “asking for it” because they dressed in a provocative manner. Those that are violent are ultimately responsible for their own actions.

The comparison made to the publication of Kate’s topless snaps is not valid, that is not a freedom-of-speech issue. I’ve seen this idea in circulation within various Islamic forums, but it is not a justifiable comparison:

As for the suggestion that “Insults” against Islam should be censored … simple answer … “No”. It is one of many diverse beliefs, and is by itself an insult against other beliefs because all other beliefs are not just mutually exclusive, but also mutually offensive. If indeed some theocratic fanatics are “offended” and opt to express that violently, then pandering to their insanity and insecurity is not tolerance, but rather is enabling their intolerance to prevail, they will simply keep upping their demands.

Holocaust denial is perhaps a better comparison, however the claim that anybody who doubts the holocaust goes to jail is factually wrong. The idea of Holocaust denial is indeed propagated within many quarters of the islamic world, yet for some bizarre reason, people do not go out into the streets to riot and murder in response to it, nor generally do such claiments go to jail, they just get laughed at and mocked. For example, the Iranian President Mahmoud Ahmadinejad frequently denies the Holocaust. His infamous UN speech not too long ago resulted in a few folks walking out as a protest, but no violence and no riots resulted.  Such proponents are correctly labelled kooks and ignored. There are indeed laws in about 17 countries against holocaust denial, not as a form of censorship against free speech, but rather as a rejection of what is essentially racism. Even so, such legislation remains controversial because it attempts to impose historical truth as a legal truth. Generally, such laws tend not to work and are not usually enforced.

In the end, we still need to understand that a violent response to criticism of what is essentially just an idea is morally wrong. Protesting is fine, boycotts are fine, but violence is not. When faced with repressive ideologies you either bend to the will of the fanatics or you take a stand.

If Allah is indeed truly offended, then they should leave it up to him to do all the smiting. Then again, if people do not want to have their beliefs mocked, perhaps they should not hold such insanely stupid beliefs. One does of course wonder what it is they actually fear, perhaps if they did learn to be more tolerant of criticism they are worried that they would then face demands for rights for women and gay people.