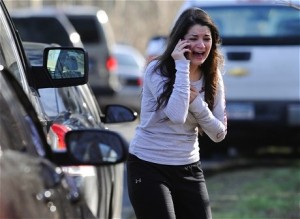 To those that say now is not the right moment, I’ll push back and say, “No sorry, now is indeed the right time”. For non US folks, this posting might appear to be a tad US focused, but for rather obvious reasons, there is a conversation that needs to be had.

According to Mother Jones, there have been at least 61 mass shootings in the last 30 years, including 15 in 2012. Most of the killers got their weapons legally, although in a culture so saturated with guns they could easily have acquired them some other way.We all appear to suffer from some form of alzheimer’s when it comes to topics such as this and quickly forget the pure horror that can be dispensed at the whim of some lunatic should he or she flip and lay hands upon weapons.

The sad fact is that while most are truly responsible, not everybody is. I do not have the precise facts for this latest incident, but what is obvious is that when some mentally unstable nutter suffering from paranoid delusions (it happens, it really does) has his acute psychosis kick in because he stops taking his medication, he often has easy access to weapons because a parent or partner, in fear of a house break-in, keeps a weapon within easy reach.

Some of the proposed answers I’ve seen from some quarters are quite frankly insane, a few religious folks are now saying that this is the result of human evil, hence the solution is to deploy more religion to cure it (face-palm). No sorry, the US is already way too religious, and there are nations out there that are far more secular and do not have this issue, the problem is not some fictitious belief in talking snakes, but rather the reality that the deep passion some have for wide gun ownership enables the mentally or emotionally unstable to gain access to such weapons.

There are no quick easy answers here, but regardless of what you think, there still needs to be a conversation, a well-reasoned debate. What is clear is that any attempt to reduce US gun ownership will result in a considerable degree of heated conversation. What is of course also clear and is important to recognise is that it is not simply anti-gun liberals such as myself who are horrified by this latest incident, supporters of the NRA are just as horrified by the killings in Newtown, they are not some sub-human species devoid of all empathy.

So will anything ever actually change, will we ever become any safer? Perhaps, but only when we all learn to love our children more than we love the possession of weapons.