These are some QED Impressions that I randomly gathered as QED proceeded today (Sat 10th Mar) …it is not everything that went on, just my notes. (I’ll be adding to it as we proceed) 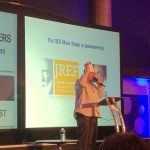 Andy is up doing the “Hi folks and thanks” speech. (Apparently we were picketed by Christians … obviously they had a big impact … I never noticed). Andy going through the agenda (yawn). Ticket prices down … they are trying sponsorship this year, and want to know what we think (hey it works for me). I do wonder what the life-size Dalek at the front is sponsoring. Ah, practical stuff … coffee, sources of food (yum).

Andy has just dragged a volunteer out front … so we get to see what they look like when wearing a t-shirt … bright orange day-glow T-shirt, yep they will be hard to find … not. 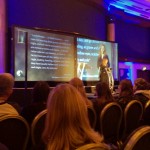 1st speaker is up … its Deborah Hyde … (who? … go here for info –jourdemayne)

She is talking about werewolves (spooky stuff) … actually a really really (oh did I forget to say really) interesting talk on the topic going very much into the details and history of it all (I’ll let others blog the details … I’m sitting back to enjoy).

Coffee break … long queue (boo) … my turn, (yikes no coffee left (insert phrase that rhymes with “clucking bell”) … worry not, I got my fix. 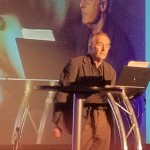 Next up is Steve Jones …evolution … a really excellent talk, I liked the illustration of how languages evolved. 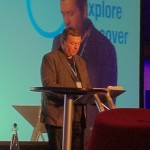 David Aaronovitch is up … conspiracy theories … yum … more good stuff (sorry folks, I’m too busy enjoying the talk to blog details … you should have bought a ticket)

Lunch – DIY … it keeps the costs down, just pop out for a snack (good move folks, no horrendous queues)

Ophelia Benson is on now doing an amazing job … going through the utterly insane antics that believers deploy, and outlines some recent examples. 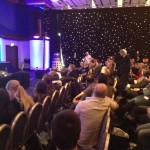 OK, lets switch to tweets to give you a feel for it all …

QED Con ‏ @QEDcon Bookshop offer: buy one book, get another one for the same price that you would of paid for it anyway #QEDcon

Dr Aust ‏ @Dr_Aust_PhD @silv24 @PaedsSHO Young Rhys’ hair is hard to miss! Though not the only pink hair at #QEDcon

Just Skeptics ‏ @JustSkeptics Anyone here at #QEDCon who chatted with the protesters? Fancy recording an unplanned podcast with us between 5PM and 6.30PM?

Pauline Sweetman ‏ @psweetman #QEDcon Good question from floor about some people “might enjoy confrontation of being offended” esp if they have dreary, routine lives

On a break now … folks are scanning the walls for power … devices are running dry …over time the audience starts to huddle the wall as we sup and top up so that we can all commence to tweet each other about the stuff we are all watching.

[Side note] Its about here I got my network access sorted out so lots of details from this point. 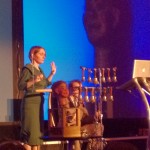 14:08 Sarah Angliss is up now … with a stage packed full of interesting looking stuff … its a geek wet-dream. Title “Voices of the Dead”. She makes robots and is also into the history of sound instruments.

Another great talk … once again ticks the box for me. We are into Q&A now.

Dinner Notes: There is a formal gala dinner, if no ticket (like me), not going (sod) … but there is a rebel dinner … so just meet in lobby at 6pm and we all head out. 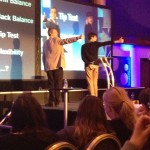 16:20 Last Afternoon Talk: … its the fantastic Richard Saunders … “The delights and Dangers of Being a TV Skeptic”. [Power bands :-) ]

T hats a wrap for today. Lots more tonight … we get to mix and hang out with the speakers … Formal dinner (for folks with tickets) … then back here at 8:15. (rebel dinner for others)