Yep its day two … I do wonder how many folks are so sleep deprived that they think the religious “conversion” on offer by the bible guy at the front door is a rather good idea right now.

First question of the day … who kidnapped the Dalek? (Yep, it has mysteriously vanished).

10:12 … room darkened, slides now playing … did a quick count, quite a few folks stayed up late. 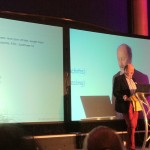 BREAK: Some Administrivia from Andy … then a 10 min break. [Parting Andy quip – “When discussing Prince Charles, the ONLY font to use is Comic Sans”] 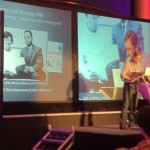 Its Ian Ridpath with “UFOs: Fact or Fantasy”

(Apologies … got caught up in conversation missed the start)

Tweets
Dean ‏ @Buster_Bear Rush of nostalgia as Ian Ridpath’s talk at #qedcon seemed to feature all the UFO books I read as a pre-teen.
Emma Jayne ‏ @EmmaJaynewithaY Loved the UFO talk with Ian Ridpath. #QEDcon
Emily B ‏ @RogueStardust UFO talk spoiler: turns out they’re unlikely to be alien sightings. How about that? ;) #QEDcon
Hayley M Stevens ‏ @Hayleystevens UFO Photos. There’s an App for that… #QEDconpic.twitter.com/qqeBlIxp
Elizabeth Donnelly ‏ @_ElizabethD Not only are people stupid enough to mistake planets for UFOs they are stupid enough to put their stupidity on YouTube. #QEDcon 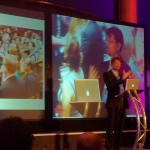 13:00 We are back … its D.J. Grothe, former magician and psychic entertainer, and also JREF president …”How to be a Bad Skeptic”

Tweets
Giles Wendes ‏ @gwendes – Love how freethinkers and skeptics can actually follow this blend of irony, sarcasm and truth. It’s beautiful. #QEDCon
Andy McColl ‏ @andy_mccoll – I’m developing a skepticism to the received idea that Americans don’t do irony #qedcon
Girl on the Net ‏ @girlonthenet – “It doesn’t take any special expertise to advance skepticism, just a commitment to telling people they’re wrong.” DJ Grothe at #qedcon
Arakwai, Glaws ‏ @Arakwai – Lol! –> RT @PencilBloke: DJ Groethe having difficulty enunciating with his tongue planted this deep in his cheek. #QEDcon
Hayley M Stevens ‏ @Hayleystevens – Oh gosh, nobody actually thinks D.J is being serious, do they?!#QEDcon
Matt Brown ‏ @Matttskimo – DJ Grothe pointing quite a fun mirror at some within the skeptical movement. #QEDCon
David Aaronovitch ‏ @DAaronovitch – Grothe pulled it off. Says much for him, #JREF and #QEDcon.
Girl on the Net ‏ @girlonthenet – What?! He was being ironic? *throws notes in bin* #qedcon
Rob ‏ @PencilBloke – Skeptics’ uniform? Red trousers, surely. #QEDcon
Emily B ‏ @RogueStardust – Quite liking the idea of bright orange t-shirts as a skeptic uniform.#QEDcon
Crispian Jago ‏ @Crispian_Jago – FFS don’t let stupid people join our club #QEDcon
Steven Sumpter ‏ @latentexistence – “The big bad news all of us have to face up to is that skeptics are really bad Skeptics.” – DJ Grothe #QEDCon 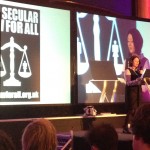 14 March 2012: International Day of Action to Defend Blasphemers and Apostates

Steven Sumpter ‏ @latentexistence – Food for thought from Namazie. She believes multiculturalism has created a falsely homogeneous community which suppresses views.#QEDCon
Ian Teeling ‏ @quietman2266 – Wow, Maryam Namazie @ #QEDcon incredibly inspirarional
Matt Brown ‏ @Matttskimo –  “The right to have a religion is not the same as a right to a religious state” – Maryam Namazie #QEDCon
BenWarsop ‏ @BENWARSOP – Religion and education are antithetical – education should teach critical thinking – Maryam Namazie’s powerful talk at #QEDcon
Pauline Sweetman ‏ @psweetman – Having listened to @maryamnamazie I am more certain than ever that UK should move to disestablishment of church & to secularism#QEDcon
Claire E Smith ‏ @Clairepie – So moved by Maryam Namazie talk I’m close to tears #Qedcon. Reaching out to fellow HUMANS is what we need more of.
Martin L Poulter ‏ @mlpoulter – Sharia law overview: en.wikipedia.org/wiki/Sharia #qedcon
BenWarsop ‏ @BENWARSOP – I am so glad you are shocked, I am always shocked when people are not shocked – Maryam Namazie #QEDcon
Lee Symes ‏ @Lee_Symes “5 cases of child marriage between the age of 5 and 10 in the UK” I have no words that can express my outrage #QEDcon
stuart rubenstein ‏ @sturubenstein – Best talk at #QEDcon by Maryam Namazie. Content challenging and delivered with charm.
Martin L Poulter ‏ @mlpoulter Namazie: Men with restraining orders for violent behaviour are taking ex-wives to Sharia courts to “renegotiate” child access etc. #qedcon
Kevink ‏ @kevink75 – Good article on how sharia law works in the UK #QEDconindependent.co.uk/news/uk/home-n…

Tonight they have “Skeptics in the Curry house”.

George Ellerby ‏ @gellerby – KINDLE USERS! You can get all of Douglas Adams’ books for £2ish today to celebrate his birthday. DO IT. #DouglasAdams60th#QEDcon #kindle 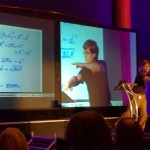 We have a surprise 10 min slot … Colin Wright

Once you get your head around this, you can bend you will to the world. – (Click here to go to his website) 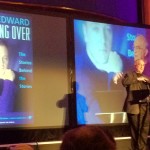 15:21 Ah what a fabulous way to end … it’s the fantastic Joe Nickell, one of the most widely respected and experienced paranormal researchers of all time. – “Investigation the Paranormal”

16:17 Andy is on the stage now wrapping things up and issues thanks to all those that made this work so well.

16:18 Mike hall on stage giving thanks to all the speakers … and lots of others.

And we are done.