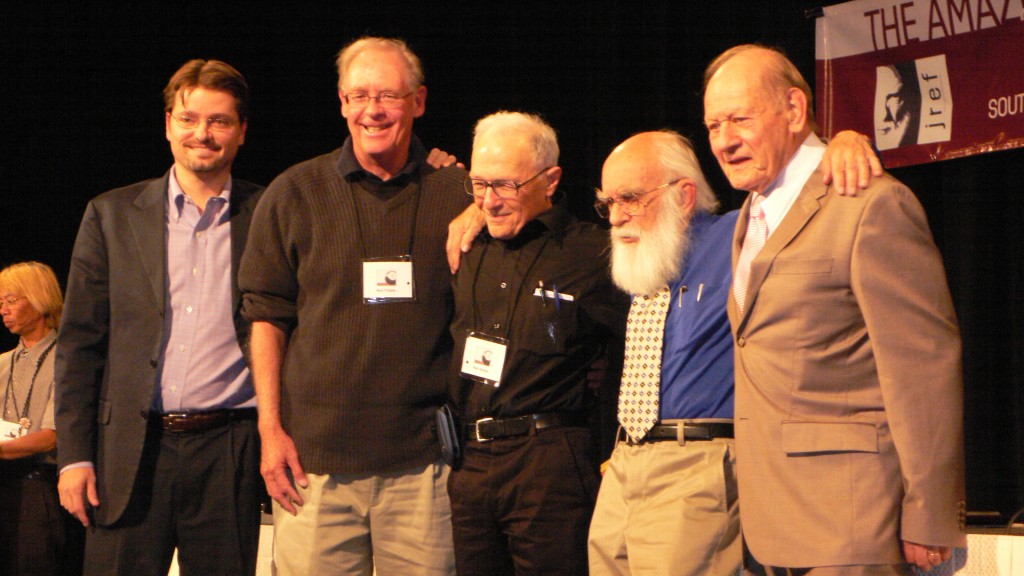 At TAM-8 (The Amazing Meeting) in Las Vegas during July 2010, there was a truly amazing opportunity to meet some skeptic heroes. Going from Left to right you can see D.J. Grothe, Ken Frazier, Ray Hyman, James Randi and Paul Kurtz. There were of course many other fabulous folks there who also fall well inside the “Skeptic Heroes” category, I just happened to catch these five together and took the above picture.

D.J. Grothe is the president of the James Randi Educational Foundation. has lectured widely on the topics at the intersection of education, science and belief at universities such as Stanford, Yale, UCLA and UC Berkelery. Formally a professional magician, he has special interests in the psychology of belief and processes of deception and self-deception. He also hosts the radio show and podcast For Good Reason.

Ken Frazier is a science writer and editor of Skeptical Inquirer, and a fellow of the American Association for the Advancement of Science. He is also the editor of several anthologies, including science Under Siege: Defending Science, Exposing Pseudoscience.

Ray Hyman is professor Emeritus of Psychology at the University of Oregon and was a founding member of the Committee for Skeptical Inquiry. He has been a consultant with the US Department of Defense and is the author of many articles and books. He is also a former magician and mentalist. Ray runs the popular Skeptics Toolbox which trains rationalists in the best methods of advancing skepticism in society.

James Randi was named “Skeptic of the Century” and one of Esquire magazines 100 best people. He has lectured around the world and also hosts the Amazing meeting each year – the largest critical thinking conference in the world. His books have become required texts for college courses on critical thinking. He began his career as a stage magician and gained a reputation as an escape artist, but is best known today as the world’s foremost investigator and de-mystifier of paranormal and pseudo scientific claims. Randi has pursued “psychic” spoonbenders, exposed the dirty tricks of the faith healers, investigated homeopathic “water with a memory”, and generally been a thorn in the sides of those who try to pull the wool overs the publics eyes in the name of the supernatural.

Paul Kurtz is Professor Emeritus of Philosophy at the State University of New York at Buffalo, but is best known for his prominent role in the United States  skeptical  community. He has been called “the father of secular humanism.” He is founder and chairman of the Committee for Skeptical Inquiry, formerly the Committee for the Scientific Investigation of Claims of the Paranormal (CSICOP), the Council for Secular Humanism, the Center for Inquiry and Prometheus Books. Taught at Vasser, Trinity, and Union colleges, and the New School for Social Research.