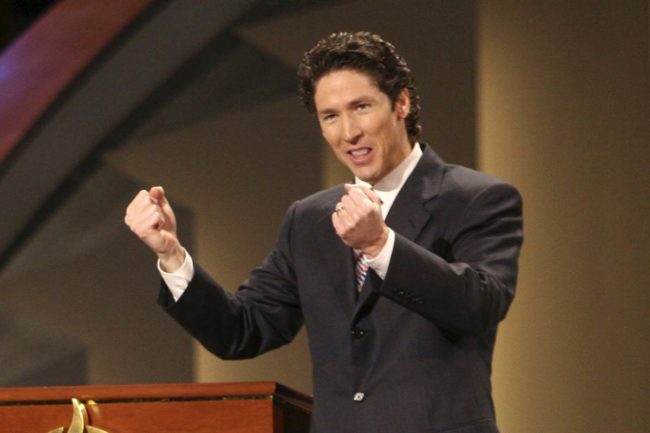 Joel Osteen, the megachurch pastor whose church is located in Houston, has received rather a lot of flak recently. Twitter and other social media platforms have been awash with claims such as the following …

Joel Osteen won't open his church that holds 16,000 to hurricane victims because it only provides shelter from taxes. #HoustonStrong

Joel Osteen and the rest of the "prosperity gospel" peddlers are parasites!#JoelOsteen pic.twitter.com/uXt0s4RdvQ

The essence of the above and many other similar tweets is that while others reached out, he firmly closed the doors of his megachurch and refused to help those around him in need. The facts are supposedly a bit different.

There was even a fake story doing the rounds that he had sailed his Luxury Yacht Through Flooded Houston to pass out copies of his latest book. That actually came from a satire site, but was soon doing the rounds as fact. It was simply not true at all.

Some of the criticism is not without merit

There is in reality some basis to all this criticism, as observed by an excellent New York Times article (that is worth reading in full) …

Before it began to rain in Houston last week, the spectacularly wealthy pastor Joel Osteen could have opened up his megachurch to serve as a logistics center. He could have announced that evacuees were welcome to take shelter there when Hurricane Harvey landed. Instead he wrote tweets like “God’s got this” and “don’t drift into doubt and fear … stay anchored to hope.” Only a couple of his posts on Twitter offered “prayers.”

On Sunday, Mr. Osteen’s church announced that it was inaccessible because of “flooding.” But intrepid journalists proved otherwise. After Mr. Osteen was humiliated on social media, he finally opened the 16,800-seat church to the public on Tuesday. When asked about the delay, Mr. Osteen said that “the city didn’t ask us to become a shelter.”

Why do people hate Joel Osteen?

There is a quite frankly weird article within the Washington Post that asks and attempts to answer this very question. The author observes …

I’ve been studying the American prosperity gospel for more than a decade, and I have come to the stunning conclusion that Joel Osteen seems to be a pretty nice guy. … And, for those who don’t mind waiting a few minutes after the service, he will shake your hand and tolerate your comment about how his hair looks even better in real life. It does.

Seriously! … he is OK because he is a “Nice guy” and his “Hair looks good”.

The core issue, the real reason why so many happily mock and criticise him, is that the guy is a rather blatant grifter who cons the gullible using religion.

If curious, then you can read rather a lot about the prosperity belief on the Wikipedia Page that covers the topic of this Theology. Basically the essence of the con is a claim that if you donate money then god will reward you financially and also will heal you. Folks such as Mr Osteen leverage this belief to emotionally manipulate the gullible into tithing and donating vast sums of money to him.

– Andrew Seidel, staff attorney for the Freedom From Religion Foundation

Joel Osteen is a con man who utilises religion to enrich himself, and so he truly does deserve to receive rather a lot of flack. My point is this – if we are going to effectively criticise him, then it is rather important to criticise him for the things he actually does and says. If you pick up stuff that is obviously not true and deploy that, then you have in effect gone full Trump. If you focus on side issues, he did not open his church to help during the flooding as you might anticipate or expect, then that is simply a very minor side issue.

The primary concern is that he is a religious grifter who manipulates the gullible.

Perhaps this observation I came across sums it all up best …

It is perhaps also well worth checking out John Oliver’s segment on the prosperity con men. It has been viewed over 15 million times for a reason …

3 thoughts on “What is the real problem with Joel Osteen?”