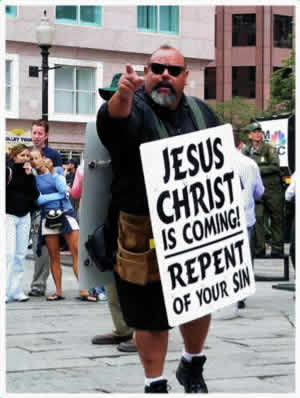 QEDcon is of course a wonderful celebration of science, scepticism and rational thinking, and a truly fascinating place. There you will meet a mix of really interesting people, so of course nobody was actually promoting Creationism inside. Ah but lurking outside the door of the hotel on the Saturday were a couple of bible thumpers.

So how did it all come about?

Having come to the conclusion that the hotel coffee did not quite cut it, I briefly ventured outside to the Starbucks next door to explore their concept of “extra shots of expresso”, an idea quite alien to hotel staff. Then, while clutching the magical brew, I was intercepted on my way back in by a chap who was rather eager to know if I was a skeptic or a “atheist”.  I could rapidly see where this was going to go because these of course were the chaps dishing out the Creationist literature that I had already heard about from a few others.

Now let’s pause for a second … should I discuss creationism with him?

The answer is no, because it is not the problem here. Suppose I sat him down and convinced him that evolution was indeed the best answer, would anything actually change? Nope, not at all, he would still be immersed in magical thinking and might perhaps consider the thought of “that is how god did it” but then revert back to the previous mindset.

So I skipped all the surface symptoms and cut to the chase by asking him why he was there.  In reply he touted the usual religious thing, and I then asked him “How do you know that?”. He suggested that the bible says …. and I asked him, “Yes, but how do you know that to be true?”. He starts to talk about “faith”, and I proceeded to explain that the word faith simply means pretending to know things that he does not actually know at all, and so I again asked him how he knows.

By this point he was getting a bit stuck, and so he threw in the towel and pleaded to his friend to come and help.

We go around the above loop once again, but this time his friend starts to talk about “experience” (Yes, you can see where this is going).

In response, I explained that if he chatted to a couple of Mormons, they would use the exact same claim, “experience”, or “knowing in your heart” or “feeling god moving inside them” … and yet he would dismiss their claim as wrong and suggest it was a delusion or perhaps the work of the devil (which perhaps is Christian speak for “delusional”). I then asked him, “In what way does your experience differ from their delusion, how did he know that his experience was real and yet identify other similar experiences as a delusion”.

Now this is the point when things got truly weird.

He looks over my shoulder, as does his friend, and then looks back to me with a very perplexed look, then looks back over my shoulder, so I turned to look at what had caught their attention … their standing right behind me were two Mormons wearing the mandatory religious smile – they had been curious to see what was up and had stopped to listen in.

The two Creationists and the two Mormons then proceeded to have a bit of a shouting match, so I decided it was time to slip away back into the safe embrace of the reason and rationality that resided inside.

I must confess, it is all rather odd in many ways for a couple of religious chaps to be doing this. Upon hearing that there is a conference that promotes science, scepticism and critical thinking taking place, their immediate go-to thought is “lets go and stand outside and see if we can persuade them to embrace our irrational and extremely silly ideas that don’t have one jot of evidence”

It is of course inevitable that as life proceeds you will encounter some individuals who are deeply religious, so let me offer a few thoughts:

The only hope is to develop a friendly rapport and start them down the track of thinking about why they believe what they believe. The very foundation of it all is built upon the idea that embracing ideas without any evidence is a really good thing to do, and that faith (pretending to know things that you do not really know) is an ideal to strive for. If you can successfully create a few cracks in this foundation, then everything that rests upon it … the magical thinking, the creationism, etc… will potentially rapidly collapse.

I should know, because I was once a deeply fanatical believer, and having been there myself at one time, I do find that I have a lot of sympathy for them.

3 thoughts on “Creationism at #QEDcon”