Replay of the QED Intro clip then Matt Parker does his bit. 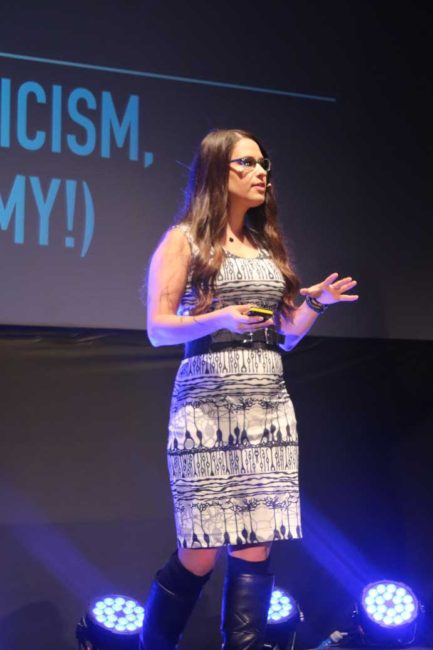 Cara introduces us to what she does as a science communicator and then lays out the path she took to get into that role. It is quite fascinating, I’d recommend watching the video when it is out.

Cara Santa Maria tells us about her life #qedcon pic.twitter.com/47DqRJAuwq

at #QEDcon : @CaraSantaMaria on Science Communication in the US pic.twitter.com/e0xcbAl2tM

The truth! @CaraSantaMaria > Anti-Intellectualism. #QEDCon
(One for host @standupmaths) pic.twitter.com/UEz87KFh2K 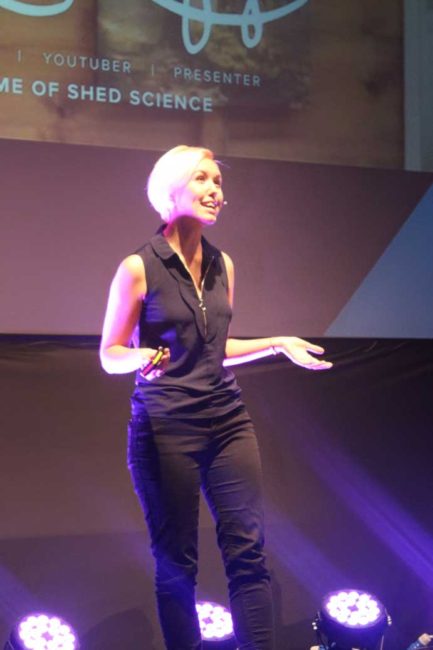 Biologist, YouTuber, and Ph.D student, Sally Le Page is talking to us about the birds and the bees … literally. First slide is of a duck penis and a bee testicle.

“and so this is a cock” … slide of Trump flashes up.

Just sharing a very large picture of flies having sex because – well – I am that childish.
Thx to @sallylepage & #QEDcon pic.twitter.com/pk5UxTI05i

“That is going to be such a weird photo, a massive penis coming out of my head” (referring to slide). “I did it to myself“.

Shows us 2009 clip of duck ejaculating. Asks who has seen that clip before … lots of hands go up. “I study this, what where you searching for to be so familiar with this“.

Sitting at #QEDcon watching a video described as someone "wanking off a duck" which was.. Erm.. Interesting.

#QEDcon @sallylepage made the most spectacular analogy in a science talk. A duck's vagina is similar to David Bowie's maze in "Labyrinth".

“The words we use impact the entire scientific process“.

Duck penises, not as cool as duck vaginas! @sallylepage at #QEDcon

I'll never think about duck and beetle genitalia quite the same way ever again. @sallylepage #QEDcon 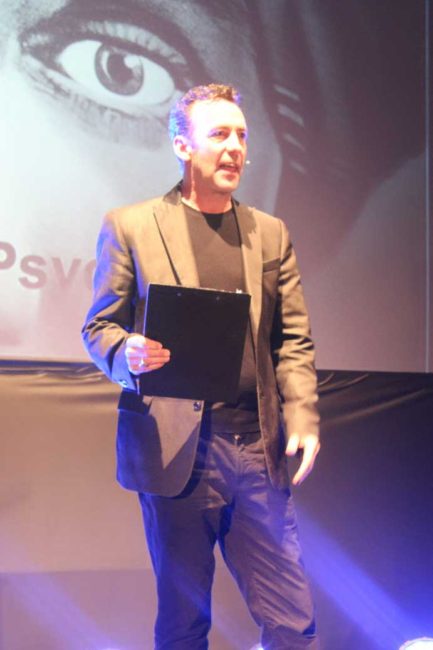 He did tarot card reading while working as a student to help make ends meet … “My God it was easy“. When a girl came concerned about her father who had been taken to hospital, the first card he turned up was the death card and she broke down. He realised how emotionally serious this all was and gave it all up soon after that.

Paul is telling us the stories of the Famous Fox sisters. and how their con worked.

There was a crystal network that mediums in the US used in the last century. When one arrived in town, he would have a list of names and addresses to work with.

In the 1920s, people would turn up, fill in slip of paper saying what they wanted. That then goes into a glass bowl that gets placed on stage (and as moved some get palmed). Those got read to the medium via a ear-piece. Paul comments, “Not much has changed in the past 100 years“.

Paul is now talking us through how the cold reading works in practise and how to play the odds and statistical probabilities to gain hits.

Barnum statements, sound specific, but are actually generic and apply to most of the population … “Those photographs, you need to sort them out“.

Pre-show work. In the old days it might involve going around graveyards to make notes. Now it is just a matter of going on Facebook.

It is exploiting people when they are at their most vulnerable.

In the UK today it is all legal as long as the show declares it is all entertainment. Even if they don’t do that, nobody follows up because by the next day the medium has moved on to the next town.

Breaking the magicians’ code to reveal the secrets of psychics; @PaulZenon at #QEDCon pic.twitter.com/lEalTQENtu

Paul Zenon sharing the secrets of the psychics. 'Why are they putting me behind the curtain'? #QEDcon pic.twitter.com/sHSuIoQi77 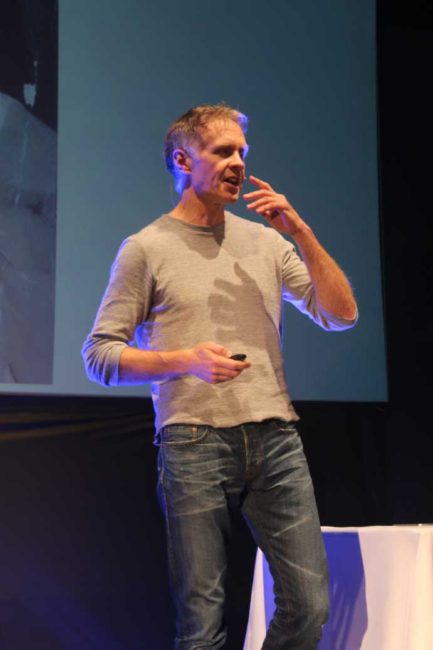 Gives examples of how some rather obviously simple solutions do not actually work.

As ice cream sales rise, so do shark attacks … why?

The sharks are clearly jealous of people eating ice-cream.

The rage to conclude – Edward Tufte

The mouse-trap model does describe the many gambits.

Haeccity … this time, this place, this specific instance, and may never be repeatable.

Winnie Langly lived to be 103 and yet she smoked for most of that time. Small small thing, some tiny bit of trivia can cause something that is inevitable to not work out that way.

Why did she survive? Susannah Mushatt Jones lived to be 116. She really really loved bacon, and yet it is very very bad for you.

We have general rules that do not appear to consistently apply. Uncertainty at an individual level can be huge, even if it is a general certainty.

“X-causes-Y” news stories never highlight the degree of uncertainty from an individual level.

Statins work. (See review of them). What it does is that instead of 10 out of 100 having a heart attack, only 5 out of 100 will. This creates a huge degree of uncertainty for individuals.

Michael Blastland at #QEDCon destroying the premises of Malcolm Gladwell’s last couple of books. The importance of chance effects. pic.twitter.com/do1HT8uA62

Michael Blastland is really engaging. This is so interesting! #QEDcon 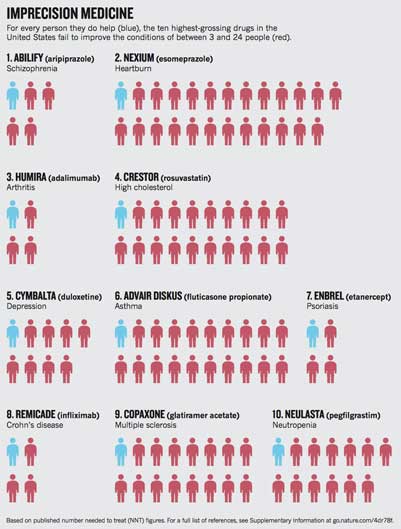 Haeccity; ‘thisness’, those tiny details that all add up to make the individual case. #QEDCon explains #GBBO & problems in the NHS. pic.twitter.com/1AhdoLrPHC

121 types of snowflakes, they are all different. We have zero predictive power to work out what any one will be.

So what?
– we should have less confidence and experiment more
– detail
– adopt a bit more

tells story of toilets being built. Money given, but none built. Followed up and told them they would be checked, and the toilets were built. The primary goal was to improve health … but when measured, nothing had changed.

Malcolm Blastland uncomfortably plays to the anti-experts; science even if it had all the facts may still have few useful answers. #QEDCon 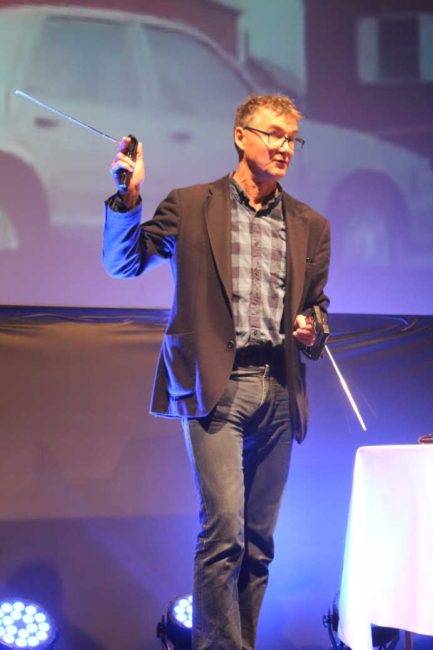 Meirion is giving us a demo of two “fake” bomb detectors. Volunteer successfully found golf-ball under cup … Meirion reveals that the other cups all had a hidden golf ball.

Wow. I remember the story, but hadn't really appreciated that the fake bomb detectors were basically divining rods. #divination #QEDCon

Meirion is now telling us the back story.

Shows us a clip of Jim McCormac at a press conference in Bagdad. The point is that clearly the head of the Bagdad bomb squad has been bribed. Attempts to contact UK authorities fell upon deaf ears.

The supposed secret sauce was the internal circuit and the associated card, so they got their hands on one and had it independently reviewed at an Oxford lab. It was exactly as expected – it was not what it was claimed to be – going to a lab and having that confirmed makes great TV

Foreign Office, MOD, and Ministry of defence were all contacted and advised that the documentary was about to be broadcast. (Apparently BBC guidelines have no rules prevent blackmailing government departments … he checked).

2pm on Fri article goes up … just before 6pm news, they are contacted and advised that the devices will be banned. That however was the start of a very long process.

They know a guy who was licensed to deploy explosives in a quarry (Sidney Alford), so they got in touch with him. His main business was making bomb detectors and he managed to get hold of one of the other devices.

Clip is played of him taking device apart then commenting. “Speaking as a professional, I’d say that is an empty plastic case“.

Meirion now talks us through the story of where these detectors came from. Malcolm Roe started with golf ball detector, but that was re-purposed and sold as a knife detectors. Soon being sold in US to police departments … that was banned and Malcolm fled back to UK and carried on the con here. Managed to con civil servants into endorsing the fake bomb detectors. Even managed to con the British Army. This is why the foreign office and the MOD did not wish to do anything about this, they were equally guilty for having enabled it, and wished it would simply all go away.

The BBC followed the money trail to see how these bribes worked to get these devices sold. Clip played about it happening in Beirut. Iraq officials were issued with bank cards that enabled them to take out large amounts of cash anywhere in the world. This was an effective way to hide where the cash came from.

They think that Jim McCormac got about $42 million out of all this. It is suspected that he will be out of jail in perhaps 2019 and will still have cash hidden away that has not been traced.

We now have a clip about an Iraqi official they worked with who worked hard to expose the conspiracy there.

Fake bomb detectors may have lead to 2,000 deaths in Iraq alone! #QEDcon

Fun fact: We got a Police Box (not Tardis) this year as no one actually noticed we've had a different Dalek each year ;) #QEDcon https://t.co/7LEpj2SxJh

Finally here is the team that made it all possible. 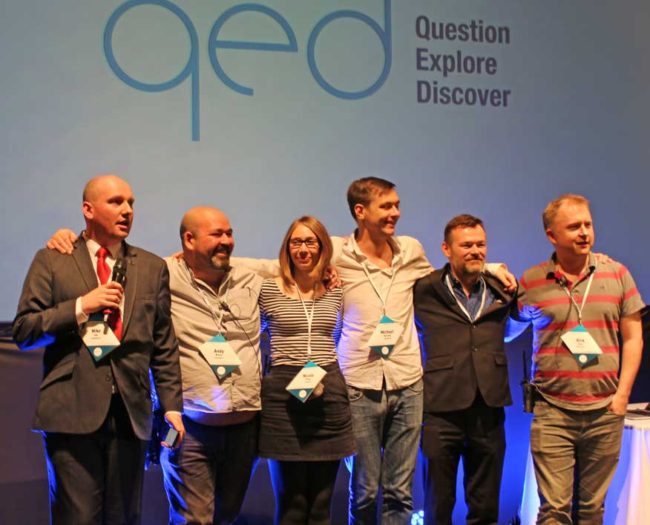