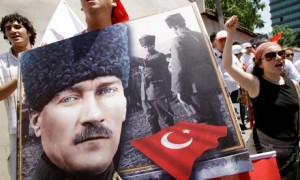 There is an interesting and thought-provoking article is today’s UK Guardian. Tehmina Kazi, the director of British Muslims for Secular Democracy writes about a new paper by Ishtiaq Hussain, published by Faith Matters. In this he outlines how the Ottoman sultans, or caliphs, in the 18th and 19th centuries took a very secular approach.

OK, before we go any further, I’d like to lay out my personal position. I’m a non-believer and suspect that if I compared notes with these folks, I’d soon be criticising their irrational beliefs. So why am I telling you about this paper? Well because the claims being made are not as factual as claimed when you consider what really happened, here is the core from the Guardian article …

Ottoman sultans, or caliphs, in the 18th and 19th centuries launched secular schools and promoted the education of women. The period of reformation known as the Tanzimat saw customary and religious laws being replaced in favour of secular European ones. More surprisingly, homosexuality was decriminalised in 1858 (long before many western states took their cue, and over a century before the American Psychiatric Association declassified it as a mental illness in 1973). Contrary to the claims of hardline groups, religious authorities approved many of these measures. In terms of broader social change, the Ottomans made strong attempts to integrate non-Muslim communities. On the cultural front, it is well-known that a minority of people claim that Islam frowns upon artistic expression. However, the last sultan/caliph, Abdulmecid Efendi (1922-1924) has numerous paintings on display in Istanbul’s new museum of modern art; many others were also keen musicians and played a variety of musical instruments.

OK, the key point: much of the above, while factual, does not reflect the daily reality for people, it is a view that is cherry-picking the nice bits for some religious PR, and ignores the broader landscape. Here is a brief reality check:-

In summary, the claims that the Ottoman’s practiced “Islam light” and was truly secular does not withstand any serious analysis.

I do appreciate that people often need to let go of irrational beliefs in steps and sometimes cannot digest complete rejection as one whole lump. This is perhaps because some believers need to be able to utilize a de-compression chamber similar to this form of “Islam light” as they rise from the depths of extreme irrationality … that is what often happens. However, make no mistake, it is not an end-game to be endorsed, but just a stepping stone that helps folks out, nothing more.

There are of course clear extremes that we can offer very obvious valid criticism of … stoning, anti-gay, anti-music, no woman drivers, anti-anybody-not-them, etc… but even the moderate supposedly secular form of “Islam Light” is irrational. The claim that a supernatural entity imparted special unique knowledge to a chosen 7th century nomad does not have one jot of evidence to support it,

Folks should of course be free to believe whatever they wish and also free to practice their beliefs in whatever way they want, however, while the extreme forms of such beliefs should never be permitted to impose their nonsense on anybody, the more moderate forms should not be surprised when silly claims are challenged … not just the supernatural claims, but also claims that Islam light is all warm and fuzzy and the Ottomans lived in some form of secular paradise.

5 thoughts on “Claim: “Islam light”, the secular version, is nice and also historical”