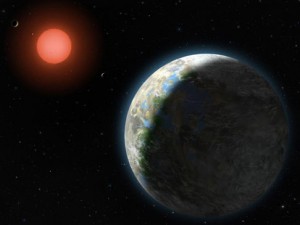 Want to buy land on another planet? If so, then just pop on over to eBay and stake your claim on the alien planet Gliese 581g … the one that was found to be potentially earth-like earlier this year.

So whats up with all this? Well apparently two blokes, Jason Connell and Alison Tippins, laid claim to the planet and have started selling plots of alien land on eBay.

Is this actually legal? Nope, its a con (duh) … well of course, but there is a bit of hand-waving going on here … perhaps enough hand-waving to fool a lot of folks into coughing up $20 to stake a claim. They claim that there is a loophole in the UN’s 1967 Outer Space Treaty, which prohibits countries from claiming property in space. The trick, so they say,  is that the treaty doesn’t say anything about private citizen, therefore they issued a declaration of ownership to the United Nations and then set up the page on eBay selling ten-acre (four-hectare) parcels of the planet for U.S. $20 each.

There is indeed a legally binding document originally drafted in 1967 and it has now been signed by nearly 100 countries. They are quite correct, it is quite clear … no  nation can own celestial bodies like the Moon or Sun or other planets. However, while it is technically true that the agreement neither prohibits nor allows individuals to claim ownership of moons or planets  … (and this is the important bit) … their claims of actual ownership don’t hold any water. International law is based on practice and opinion — how nations behave and what they say about a legal issue. And some of them have said individuals can not own space … period. In fact, in Canada one nut selling property on the moon was found guilty of fraud and thrown in jail, So, any country that has signed the Treaty can make such arrests, though that’s up to each country in question.

Net effect is that these two are risking arrest for fraud.

Perhaps in the end, most countries will turn a blind eye to this, and other similar scams. Buying land on an alien world!!! … come on now, what else can it be but a tax on stupidity for those that truly buy into the idea.

All you get for your $20 is a bit of paper, oh and some practical guidance as well … they advise …

We are not responsible for your transportation to Zarmina nor any challenges you face when you arrive.

1 thought on “Buying land on another planet”