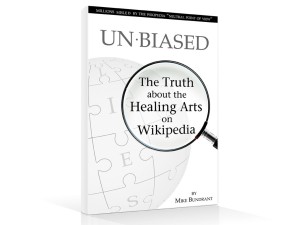 Unbiased: The Truth about the Healing Arts on Wikipedia

… and yes, it is everything that the title hints at …

Wikipedia is on a misinformation campaign against alternative health and the healing arts. The public needs to know it. Natural health deserves fair representation.

We’re going to set the record straight. We need your help and invite you to get involved in the process. Please check the various reward levels to discover how to participate.

Here’s what we’re up against:

… and what follows are various screenshots of Wikipedia pages with specific bits highlighted where woo is correctly identified as woo, but which he feels is biased.

I do agree that Wikipedia has a bias, but it is a good bias, one that ensures accuracy and reliability. If there is evidence, it gets written up as a fact, and if something popular has no credible scientific evidence, then Wikipedia will quite rightly point that out.

Where things rapidly go down hill for folks who have a specific alternative medicine belief is that they soon discover that they can’t utilise Wikipedia to promote bogus claims.

It must be the spring air, because exactly one year ago, there was a petition on Change.org that called for … “Jimmy Wales, Founder of Wikipedia: Create and enforce new policies that allow for true scientific discourse about holistic approaches to healing.“… and it response to that spring blooming of quackery Mr Wales replied …

No, you have to be kidding me. Every single person who signed this petition needs to go back to check their premises and think harder about what it means to be honest, factual, truthful.

Wikipedia’s policies around this kind of thing are exactly spot-on and correct. If you can get your work published in respectable scientific journals – that is to say, if you can produce evidence through replicable scientific experiments, then Wikipedia will cover it appropriately.

… and that nailed it in one.

As for this latest Kickstarter, well it is indeed more of exactly the same, so the same reply fully applies and completely covers it. There we have Mike Bundrant asking for $67,100 to spend the next nine months writing an “unbiased” book in which he will … “present compelling scientific evidence that is not represented on Wikipedia” … for a wide collection of Alternative medicine topics that includes …

… and wow, that is a tick list of almost all the alternative health woo going.

What can I say except to perhaps ponder the thought that anybody pushing the title “unbiased” as an alternative to Wikipedia is perhaps a tad biased.

Why wait for publication, let’s test this now

… and then this explanation …

Well then, where to start?

The suggestion is to start with Ullman’s encounter with Mr Wales … so yes you could start there, but let’s go for the fact-based version of that.

We could also start is with the HuffPo article, but many who are not familiar with the full conversation could potentially read the referenced HuffPo article … in isolation … and would perhaps be completely fooled into thinking that he was making a credible case. Ah but is he? (hint: “no”).

Perhaps the best place to start is to read Mr Ullman’s Wikipedia page, because if you did so, you would then soon begin to appreciate that he is neither reliable, nor honest in his various dealings on this topic. There you would (for example) discover that he was called upon as an expert witness in a class action against a homeopathy Vendor for misleading marketing, and what was said by the judge was this …

“he is familiar with the theory of homeopathic treatment, his opinions regarding its effectiveness was unsupported and biased. The Court gave no weight to his testimony.“

… and thus when presented with this golden opportunity to promote his “scientific” evidence, he was unable to produce anything credible. It should of course not be a surprise because Mr Ullman is known to hold the opinion that evidence-based medicine cannot be trusted.

So has anybody written a rebuttal to his HuffPo article?

Yes indeed, it is all taken apart in detail, and nothing is left …

Ullman goes on to say that there are more than, “150 placebo controlled clinical studies, most of which have shown positive results, either compared with a placebo or compared with a conventional drug.” However, as Kimball Atwood points out on Science Based Medicine, “The ‘supportive research’ section of the article may look impressive to the naïve reader. In fact, some of the references support the non-efficacy of homeopathy and the others are hopelessly flawed.”

So will this Kickstarter for a book document actual scientific evidence that withstands scrutiny?

Give the above randomly selected example … nope.

In the end what you find is that when you dilute the actual science down to almost nothing with bullshit, you are not left with even stronger science, but rather just bullshit. (see what I did there, that is a homeopathy reference).

Yes because it matters, people are being conned into embracing stuff that simply does not work by these purveyors of quackery and snake oil, and so while I suspect that Mr Ullman and Mr Bundrant are quite sincere because they truly do believe, facts are facts, they are also sincerely wrong, the quantity of credible evidence that confirms such beliefs is just not there and that is why none of it makes the cut in Wikipedia – which is the way it really should be.

Side Note: Snake oil is actually quite good for you, it is rich in Omega 3 (and I’m not making that up)