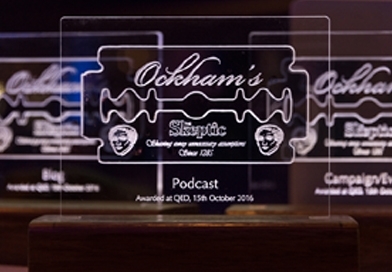 Sadly I missed most of Saturday evening, but did manage to be back just in time to hear Richard Wiseman say, “Well, that’s it then everybody, we do hope you had a great evening“, so at least I got that one last line. Net effect, I have no pictures of my own.

I’ve already done several previous postings that contain a small selection of pictures and associated tweets (Skepticamp here, Saturday here, and Sunday here). That was intended to be it, but I then found myself pondering over the Ockham awards given out, and so I’d like to add into that set one more #QEDCon specific posting that highlights those well-deserved awards. This is that posting.

The Ockham awards are designed to draw attention to those people who work hard to get a great message out there, and so each year The Skeptic Magazine collects nominations, and then their readers vote.

So what specific categories are the awards for?

So how did the voting go this year?

As follows (and I’ve included links that you can click and find out about the work they do).

Best Blog – Crispian Jago: Always Look on the Bright Side of Death

Blog of the year to @Crispian_Jago. So well deserved! Hope all goes well with you! #QEDcon pic.twitter.com/V0YGGMone4

This new category “for the most audacious pseudo-science of the year” was a wonderful new addition. By a total landslide Gwyneth Paltrow’s lifestyle brand wins, and this is truly a well deserved winner.

For some odd reason, I really can’t imagine why, Gwyneth did not turn up to receive her prize.

Congrats to @goop for winning our Rusty Razor award of 2017.

By the next day this one made the press …

Well done @GwynethPaltrow on your efforts in the Public Misunderstanding of Science. #QEDcon https://t.co/B8Dx0vvNR3

As hinted at above, the one that made a truly big media splash was the Rusty Razor award for Goop as the worst bit of pseudoscience of the year. It went viral and global. Quite hilariously it was also reported within the following outlets (you are all devoted readers of these and had spotted this already … right?) …

[Side note: I’ve added a rel=”nofollow” to the above links, click here to a wikipedia article to find out why doing that is a good idea].

Personally I’m blown away by the concept of finding something in Brietbart, Fox News, and the Daily Mail that I actually agree with. What is also truly fascinating is how the commenters under the above articles not only recognise that she is conning people, but also applaud the award. That’s a truly big win, it reached and influenced those audiences in a positive way.

Yikes, did I really just link to Breitbart, Fox News, and the Daily Mail, then praised their readers?

We live in strange times.

So quickly moving on to other reactions

I can't retweet articles about this enough. I loved being at @QEDcon to see the award presented live! https://t.co/8ErqY7TahA

It’s Saturday today, so this is all one week ago. If you just happen to find yourself consuming a beverage or two, then pause and raise your glass to toast this year’s winners. But don’t just stop there, why not expand your horizon a bit and check out what they do as well.