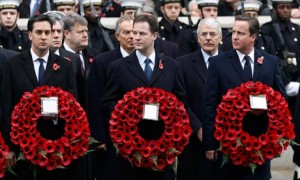 There is a very interesting and thoughtful article in the Telegraph today by Peter Thompson, director of the Centre for Ernst Bloch Studies at the University of Sheffield. In it he lays out his thoughts regarding what goes on today – for the non UK-based folks, it is Remembrance Sunday. Remembrance Sunday is held on the Sunday nearest to 11 November Armistice Day (the anniversary of the end of hostilities in the First World War at 11 a.m. in 1918) “to commemorate the contribution of British and Commonwealth military and civilian servicemen and women in the two World Wars and later conflicts“.

The context of his article is the news that the BHA (British Humanist Association) wishes to take part. I get that, it is a valid claim since many of those who fought and died in the services were non-believers. For example, the case of Major Sidney Excell, a committed atheist …

The family of the late Major Sidney Excell, a committed atheist best known as the man who arrested Head of the Gestapo Heinrich Himmler have today said that they are appalled at the government refusal to include a humanist at the wreath laying ceremony on Remembrance Day. In a statement put out by the family they commented  ‘It is devastating to know that a man who played not a small role in history not be remembered by the country he so loved. It is disgusting that the Government has consistently denied requests for a humanist representative to be placed with religious representatives. We call for an end to this blatant discrimination – and that is what it is.

‘It is denying all secular service men and women, past and present, a representative when if they had been religious they would have been allowed one. All who serve should be remembered: secular, undecided, unaffiliated or religious. This is not a request for anything more than we be included.’

The UK Armed Forces Humanist Association, supported by the BHA, are running the ‘For All Who Serve’ campaign calling for humanist representation at the national Remembrance Ceremony. This is the fourth year of the campaign, with the Department for Culture, Media and Sport continuing to refuse equal representation on the day of remembrance.

To add to that, we have David Brittain, general secretary of the United Kingdom Armed Forces Humanist Association (UKAFHA) and a humanist celebrant, writing about the case for humanists to be represented in the Guardian …

Nearly 15% of personnel in our armed forces are not religious, and many feel overlooked by the ceremony, which seems to be the exclusive property of someone’s god.

Humanists – who are people who aim to live honourable and moral lives without God – have been specifically excluded from any involvement in the design of the existing Remembrance ceremony. We have also been excluded by government from even being allowed to lay a wreath at the Cenotaph ceremony, on behalf of those of no religion. This is unacceptable

Some would argue that the non-believers are represented by the wreaths laid by The Queen, the politicians, the Army, his Regimental Association, the British Legion etc. etc. Others point out that if 14 different religious groups can stick their oar in, then why shouldn’t the openly non-religious be represented? Some non-believers object to all this by observing that the claim that the BHA represents all non-believers is not true, many have not signed up to their club. Also, how can it even claim to be a national, collective act of memorializing if only the religious are represented.

Anyway, back to the article by Peter Thompson, he writes …

… despite having served in the army I can’t bring myself to support Remembrance Sunday because behind the facade of concern and mourning for the hundreds of thousands of dead, there is actually a militarisation and sanctification by church, state and monarchy which allows us to actually forget that war is a highly political act carried out for highly political aims not usually in the interests of those who suffer most from its consequences.

Lest We Forget actually means precisely that we should forget about the causes of conflict – which are always apparently far too complex for mere mortals to fathom – and about the inter-imperialist rivalry which saw those lads taken from the countryside and towns across Europe and used as expendable cannon fodder against each other; about the fact that we still send those same working-class lads from unemployment black spots off to fight in unwinnable and even illegal wars in the interests of the rich and powerful. The parade of warmongering politicians in their Sunday best bowing their heads in prayer and wearing their poppies with pride this weekend should be enough to politicise anyone, I would have thought.

However, the question of what an atheist is to make of Remembrance Sunday and the state-church-monarchy phalanx behind which it is celebrated is one which can only be answered in the usual way: it depends on what sort of atheist one is. If anything, Remembrance Sunday is proof of the statement that there is no such thing as a single identifiable group called atheists.

I think he has nailed it.

Personally, what really causes me to pause is the sight of David Cameron, standing po-faced at the Cenotaph today, after just returning from flogging military aircraft and other weaponry of death to dictators in one of the world’s most volatile regions.

Looking across the diversity of non-belief, some will opt to take part for good reasons and others will opt to not take part also for good reasons, and that is the way it should be, because while non-believers might indeed agree on the god question, there exists a vast diversity of thought on most other topics. Who am I, or anybody else, to dictate what others should do or not do, we simply articulate our own thoughts, and also at the same time listen to the thoughts of others and learn from the well-reasoned arguments that are presented.

In the end, Remembrance Sunday used to stand for pacifism and was, and to some degree still is, essentially an anti-war message,  at least that is what I was always told 11th of Nov was all about, so perhaps it is time to remember that. Remembrance of the fallen has been hijacked to a degree and those of us who value humanity need to hijack it back, atheist or not.