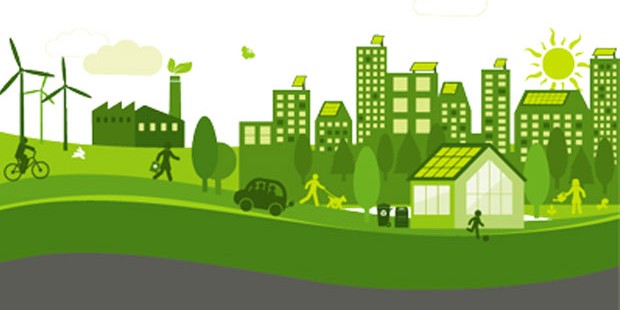 If the phrase “Green New Deal” brings to mind Roosevelt’s New Deal then you have indeed instantly jumped to the correct image, because this is exactly what the term is designed to do. The idea is to take Roosevelt’s economic stimulus and blend in Green ideas such as renewable energy and resource efficiency

The term was first coined by journalist Thomas L. Friedman back in Jan 2007 when he wrote an article titled “A Warning from the Garden” …

…The right rallying call is for a “Green New Deal.” The New Deal was not built on a magic bullet, but on a broad range of programs and industrial projects to revitalize America. Ditto for an energy New Deal. If we are to turn the tide on climate change and end our oil addiction, we need more of everything: solar, wind, hydro, ethanol, biodiesel, clean coal and nuclear power — and conservation.

It takes a Green New Deal because to nurture all of these technologies to a point that they really scale would be a huge industrial project. If you have put a windmill in your yard or some solar panels on your roof, bless your heart. But we will only green the world when we change the very nature of the electricity grid — moving it away from dirty coal or oil to clean coal and renewables. And that is a huge industrial project — much bigger than anyone has told you. Finally, like the New Deal, if we undertake the green version, it has the potential to create a whole new clean power industry to spur our economy into the 21st century.

The idea was inspirational and led to the creation of the Green New Deal Group who published a report on it all in 2008. From there, later that same year, it then gained even further traction when the United Nations Environment Programme (UNEP) began to promote the concept.

Well Yes, but that was 10 years ago, why is this a thing now?

Basically, after the Nov 2018 elections a “Green New Deal” faction has begun to emerge amongst the newly elected representatives. These are the people who have the potential to make this actually happen on a larger scale.

Talk Specifics: What exactly does it entail?

These are all things that only elected representatives can enable, hence the importance of this being a political movement …

Is all this a popular Idea?

What poll was that, and is it a reliable one?

It was the following and yes the source is reliable, it was a real poll conducted by the Yale Program on Climate Change Communication …

In a highly polarised political arena, this thankfully bridges the divide like nothing else currently does. Below is a chart that illustrates this …

There is clearly some hard-core Trump-base fossil-fuel sponsored opposition, but they are not classical conservatives, just Trump cult fanatics. Beyond that fringe there truly is Bipartisan support for this.

Does it have political support?

As previously mentioned, yes it does. After Nov 2018 it has become clear that at least 40 members of Congress (to date) endorsed the idea.

Should you Jump in and Support This?

I’m really not sure opting out of this is a rational choice. One newly elected house representative who takes up her seat in Jan spelled it out like this …

Incidentally, her vision is not to simply have a committee to talk about it, but instead is to actually take meaningful action …

Will anything get done?

In a world where polls highlight that 81% of the public support this, those elected representatives that push against this are pushing against the vast majority of those that voted for them. If they persist then the people will remember that in 2020.

We might be tempted to despair when faced with the lack of progress in addressing Climate change, but there is also vision and hope for something far better than the current utterly repugnant slop that is being served up by the current administration who insist it is all yummy, but in reality leaves most gagging. Be encouraged by the vision and the potential steps towards something far better.

19 thoughts on “What is the Green New Deal?”