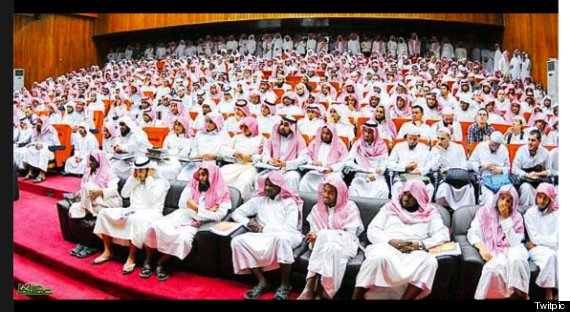 It sound like a joke, but once again the United Nations has managed to do something that is quite frankly so bizarre it can potentially be grasped as some sort of prank. Previously, the U.N. have already managed to find the one nation on the planet that has the absolute worst human rights record, and in effect appointed the poacher to be the gamekeeper. To be specific regarding that …

… and then proceeded to elect them into membership of the U.N. Human Rights council.

You would think that it would be almost impossible to top that with something even more absurd, but apparently the U.N. has been quite willing to take such criticism as a challenge, and so it has now achieved exactly that.

The Geneva-based human rights group UN Watch condemned the U.N.’s election of Saudi Arabia, “the world’s most misogynistic regime,” to a 2018-2022 term on its Commission on the Status of Women, the U.N. agency “exclusively dedicated to the promotion of gender equality and the empowerment of women.”

“Electing Saudi Arabia to protect women’s rights is like making an arsonist into the town fire chief,” said Hillel Neuer. “It’s absurd. “Saudi women,” said Neuer, “must have a male guardian who makes all critical decisions on her behalf, controlling a woman’s life from her birth until death, and Saudi Arabia bans women from driving cars.”

The vote itself is reported within a U.N. press release as follows …

Commission on the Status of Women:The Council elected by secret ballot 13 members to four-year terms,beginning at the first meeting of the Commission’s sixty-third session in 2018 and expiring at the close of the sixty-sixth session in 2022:  Algeria, Comoros, Congo, Ghana and Kenya (African States); Iraq, Japan, Republic of Korea, Saudi Arabia and Turkmenistan (Asia-Pacific States); and Ecuador, Haiti and Nicaragua (Latin American and Caribbean States).

To understand the absurdity of this,read what happened when #Saudi Arabia appeared for 1st time before UN women's rights committee in Geneva pic.twitter.com/kEu7tqhlHw

Below is a picture of a meeting that took place in Saudi Arabia on the topic of Woman in Society back in 2015. Note that exactly zero women are attending.

This is an illustration of just how farcical this latest appointment actually is.

So how do things actually stand in Saudi Arable for Women?

The Wikipedia page covers it all in great detail. Here are a few key extracts.

Under Saudi law, all females must have a male guardian (wali), typically a father, brother, husband or uncle (mahram). Girls and women are forbidden from traveling, conducting official business, or undergoing certain medical procedures without permission from their male guardians.[42]

… Some examples of the importance of permission are:

Employment for women has a number of restrictions under Saudi law and culture. According to the Saudi Labor Minister Dr. Ghazi Al-Qusaibi (speaking in 2006):

“the [Labor] Ministry is not acting to [promote] women’s employment since the best place for a woman to serve is in her own home.

The quality of education is lower for females than males. Curricula and textbooks are updated less frequently, and teachers tend to be less qualified. At the higher levels, males have better research facilities.[102][103]

Women must show the signed permission from a mahram (close male relative—husband, son, father, uncle or grandson) before she is free to travel, even inside Saudi Arabia.[112]

Women are not allowed to drive in Saudi Arabia … In July 2011 a woman from Jeddah was sentenced to ten lashes by whip for driving a car.[126]

The above are perhaps familiar and well-known issues, and yet it only scratches the surface, I’ve not even mentioned the mandatory dress code. The key point to grasp is this – Human Rights are Women’s Rights, and Womens rights are Human Rights is an utterly alien concept in Saudi Arabia.

Impact of this appointment

This latest appointment is quite frankly akin to appointing a child molester to run the local daycare nursery, it really is that crass and repugnant.