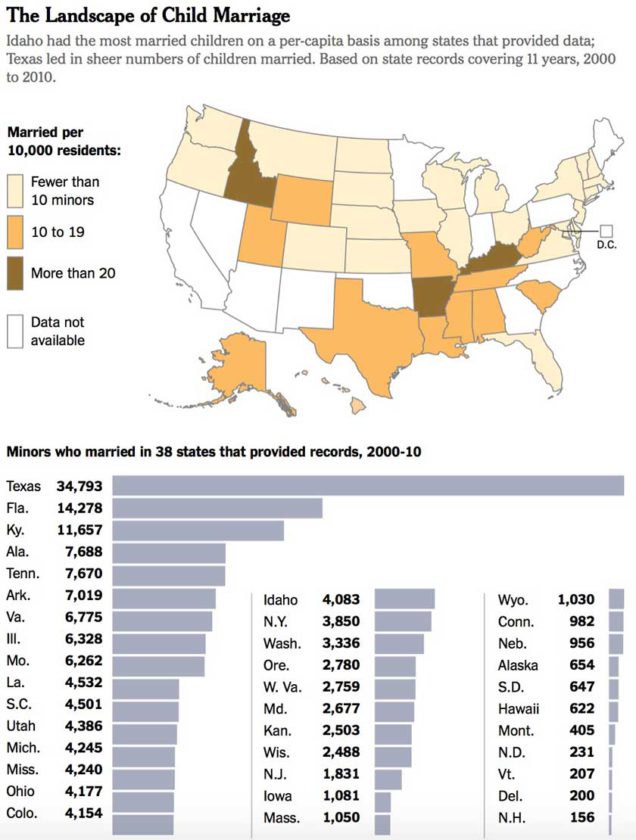 CEFM is defined as a formal marriage or informal union where one or both parties is under the age of 18. As of 2010, there were legal prohibitions against this practice in 158 countries …

..CEFM often occurs in contexts of poverty, displacement, or societal pressures, and prevalence rates are highest in the most impoverished and most rural regions of the world.

…Ultimately CEFM arises from, and often perpetuates, gender inequality. It is a human rights abuse that contributes to economic hardship and leads to under-investment in girls’ educational and health care needs.

There is one rather embarrassing flaw with this statement. When it comes to such practises, the US is itself deeply guilty.

On 26th May, the Pulitzer Prize winning journalist Nicholas Kristof wrote one of his trademark progressive articles in the New York Times. It exposes the dirty secret of US Child Brides …

When she was a scrawny 11-year-old, Sherry Johnson found out one day that she was about to be married to a 20-year-old member of her church who had raped her.

“It was forced on me,” she recalls. She had become pregnant, she says, and child welfare authorities were investigating — so her family and church officials decided the simplest way to avoid a messy criminal case was to organize a wedding.

“My mom asked me if I wanted to get married, and I said, ‘I don’t know, what is marriage, how do I act like a wife?’” Johnson remembers today, many years later. “She said, ‘Well, I guess you’re just going to get married.’”

Is this just one odd case?

No, the problem is deep, wholly legal, and common in some states. here is a chat of the statistics he has gathered … 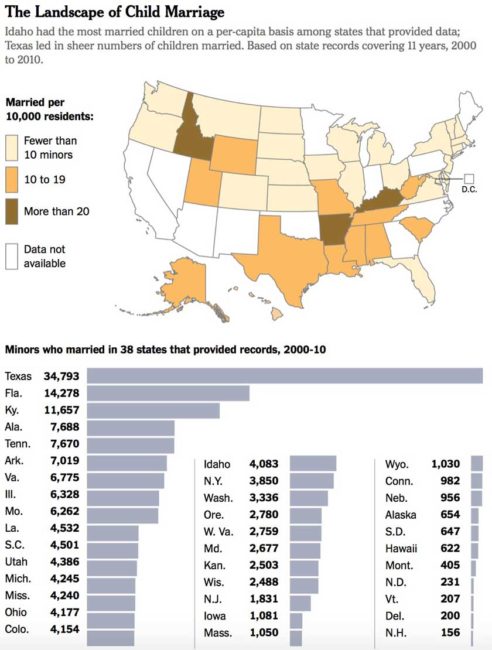 To spell that out into raw statistics for you – more than 167,000 young people age 17 and under married in 38 states between 2000 and 2010. That data comes via a search of available marriage license data by a group called Unchained at Last.

Behind the Numbers are real individuals caught in the maelstrom

“It was a terrible life,” Johnson recalls, recounting her years as a child raising children. She missed school and remembers spending her days changing diapers, arguing with her husband and struggling to pay expenses. She ended up with pregnancy after pregnancy — nine children in all — while her husband periodically abandoned her.

“They took the handcuffs from handcuffing him,” she says, referring to the risk he faced of arrest for rape, “to handcuffing me, by marrying me without me knowing what I was doing.”

I thought that the age limit was 16

Apparently not. In the US the age limit varies from state to state. Many, including Florida, have no lower age limit at all. 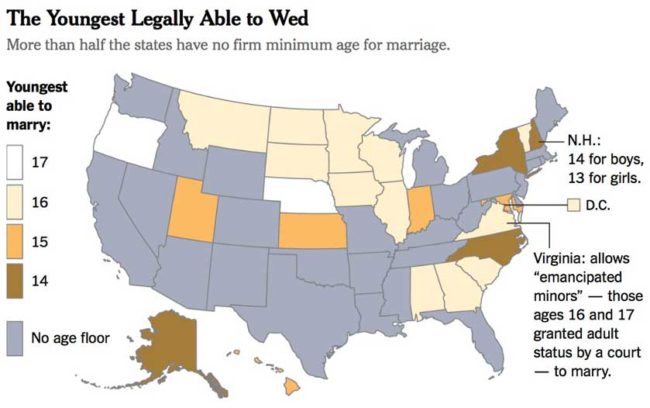 While the US state department is quite right to condemn the practise in other nations such as Bangladesh or Tanzania, you can’t help be observe that they are being f**king hypocrites. To quote a bible text …

You hypocrite, first take the plank out of your own eye, and then you will see clearly to remove the speck from your brother’s eye.

Why does this happen?

The answer is that it is often a tool used to cover up abuse.

Johnson, the former 11-year-old unwitting bride who is now fighting for Florida to set a minimum marriage age (there is none now), says that her family attended a conservative Pentecostal church and that other girls of a similar age periodically also married. Often, she says, this was to hide rapes by church elders.

She says she was raped by both a minister and a parishioner and gave birth to a daughter when she was just 10 (the birth certificate confirms that). A judge approved the marriage to end the rape investigation, she says, telling her, “What we want is for you to get married.”

So let me get this straight: In the minds of American judges and state legislators, unwed motherhood is a worse problem than grown men raping and impregnating 10-year-old girls, and forced child marriage is the appropriate solution?

This is a tragedy inflicted on children by middle aged men who largely dominate positions of political power. Women’s voices are needed in government more than ever, so that government policies designed to protect men who rape and ruin children can finally be repealed. Not to mention all the work needed on the many other morally deficient policies currently in the news.

Let there be no doubt that a policy that allows an 11 year old girl to be married off is barbaric, and any man that is complicit is a soulless barbarian.

Maturity issues aside, as a matter of law we don’t allow 17-year-old children to enter into contracts, they can’t legally made medical decisions without permission from a court, they can’t vote, they can’t get a drivers license or insurance. There are always mature teens, maturity is a process. That’s not what we’re talking about. Rape is a crime. Embarrassed families can suck it up. Let’s call child marriage by its rightful name, rape. Children, even those who think they want it, should not be allowed to marry. And Juliet wasn’t real, remember.

Cassandra SF-BayArea
This happened to my grandma – messed her up. I still feel odd around my grandpa. Her ex-husband. My great grandparents were just doing what you did “back then”. So short sighted and small minded but they didn’t want her to be stigmatized by the rape so they tried to transform the situation into what they felt would be best for her future and her childs. (my mom) … she went on to have 3 more daughters with my grandpa. She ended up becoming an alcoholic and a terrible mother. The trauma of which has impacted my moms and my aunts lives in real and lasting ways. Its sad to see it manifest in the behavior and norms in their lives, addiction being one, to try and mask their pain. Sad stuff. My heart goes out to women and girls who are victims of this abuse. I hope these laws can be changed… I am not surprised that male lawmakers decline to do the right thing on behalf of women. We need more women in office. Lets make that happen so they can do the right thing!

Rick Vermont
“but it did interrupt Johnson’s attendance at elementary school.”

I am still trying to get past this sentence.

Cherie Salt Lake City, UT
Wow. I’m deeply saddened to learn that these barbaric practices exist in other insulated communities outside the FLDS. And that this criminality is condoned in our United States. How could adults in the judicial system throw these children to the wolves like that? 11 years old!?! A pregnant child should ALWAYS be treated as a crime.

jenryan nyc
Out of The top ten states for minors marrying, eight of them are — wait for it — RED STATES IN THE SOUTH.

Why am i absolutely not surprised?

1 thought on “The shocking scandal of child brides”