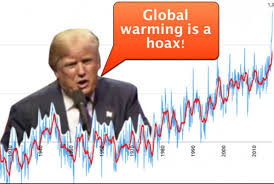 We stand at a pivotal moment where we, as a species, are starting down the road of taking decisive action to address the human initiated change in global climate. In December 2015 almost every nation on the planet signed what is now known as the Paris Agreement, and on the 4th November just a few days ago that entered into legal force. It basically means that enough of those nations that had previously signed the agreement had now formally bound themselves legally to adhere to their previously declared reduction of greenhouse gasses.

In other words, decisive action is now in place, an actual legal commitment, and not simply a wish list. An overly simplistic metaphor that illustrates the different between 3rd November and the 4th November is on on the 3rd we simply dreamed about that vacation, on the 4th we went out and bought the ticket that will potentially take us there.

But These are natural Cycles, it’s not our fault

It is often suggested that what we see is a natural cycle and not an actual catastrophe for us all, so let’s pause and ponder on that for a bit. It is a quite understandable response by many. Yes, the climate does change and does indeed vary naturally, we know that, so the key is to ask ourselves if what is now being observed is just part of a natural cycle or is something else.

Over at skepticalscience there is a good writeup on this. Yes that site has similar name to this site. John Cook, the admin there, has a specific tight focus on just Climate Change, I’m a tad more generic and promote scientific skepticism in general. He writes on this topic as follows…

This argument is, perhaps, one of the most common raised by the average person, rather than someone who makes a career out of denying climate change. Cyclical variations in climate are well-known to the public; we all studied the ice ages in school. However, climate isn’t inherently cyclical.

A common misunderstanding of the climate system characterizes it like a pendulum. The planet will warm up to “cancel out” a previous period of cooling, spurred by some internal equilibrium. This view of the climate is incorrect. Internal variability will move energy between the ocean and the atmosphere, causing short-term warming and cooling of the surface in events such as El Nino and La Nina, and longer-term changes when similar cycles operate on decadal scales. However, internal forces do not cause climate change. Appreciable changes in climate are the result of changes in the energy balance of the Earth, which requires “external” forcings, such as changes in solar output, albedo, and atmospheric greenhouse gases. These forcings can be cyclical, as they are in the ice ages, but they can come in different shapes entirely.

For this reason, “it’s just a natural cycle” is a bit of a cop-out argument. The Earth doesn’t warm up because it feels like it. It warms up because something forces it to. Scientists keep track of natural forcings, but the observed warming of the planet over the second half of the 20th century can only be explained by adding in anthropogenic radiative forcings, namely increases in greenhouse gases such as carbon dioxide.

He expands upon that in detail, and so it is worth checking out that page if curious to read more.

As an alternative, here is a short five minute clip by John that lays out the several independent lines of evidence that show that global warming is happening and caused by human activity, and not by natural cycles. It is very accessible and is designed for the public.

OK, so on to the question I’m asking myself today.

What Would Trump Do?

His stance on the entire topic is quite frankly bizarre. Back in 2012 he was tweeting weird conspiracy theories like this …

… but that was 4 years ago, and so we do need to also consider the real possibility that within that four year period he has given the issue some thought and might potentially have changed his mind.

Well, in 2014 he was still banging that conspiracy drum rather robustly …

NBC News just called it the great freeze – coldest weather in years. Is our country still spending money on the GLOBAL WARMING HOAX?

So what about now, has the rush to the White House given him any pause?

During a campaign rally in North Dakota last May he said …

… and that stance is a specific and direct threat to the decisive action that has been taken internationally.

In the run up to election day this has emerged …(and sadly due to the torrent of other BS, it failed to gain the attention it truly deserves) …

In the last week, Republican presidential nominee Donald Trump has repeatedly vowed to zero out all federal spending on clean energy research and development. And the plan he released would also zero out all other spending on anything to do with climate change, including the government’s entire climate science effort.

This is a seriously huge bombshell and yet it has not even warranted a mention.

He has also been promoting the idea of getting the coal and gas industry rolling in a big way.

Should we worry, can’t we just hope that the U.S. Environmental Protection Agency (EPA) will put the brakes on all his lunacy?

he is “pushing” to have a climate change denier and fossil fuel promoter, Kathleen Hartnett White, named as head of the U.S. Environmental Protection Agency (EPA) if Trump is elected president in November.

White currently serves as a fellow-in-residence at the Texas Public Policy Foundation, which, like CEI, is funded by ExxonMobil and Koch Industries, and she also serves on the Trump campaign’s economic advisory team.

White co-heads the Texas Public Policy Foundation’s Fueling Freedom Project, which has among its stated goals to “explain the forgotten moral case for fossil fuels” and “end the regulation of CO2 as a pollutant.”

on September 28, the news comes as the Trump campaign has also announced that another climate change denier — Myron Ebell of the Competitive Enterprise Institute (CEI) — is leading Trump’s EPA transition team.

About now would perhaps be the right time to start hitting your head against the table.

If you actually care about there being a viable human civilisation on this planet in not too distant the future, then do not vote for Donald Trump. He represents a real existential threat to our ability to tackle what is the greatest challenge we have ever faced.

Actually, to be blunt, there are of course numerous other reasons to not vote for Trump, this one simply tickles the surface of all that. I still however think that even this by itself is a deal breaker.