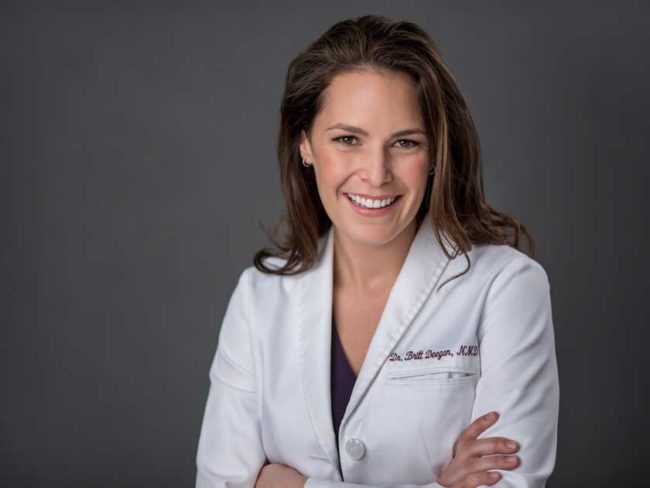 You may know that Britt Hermes, who is an international skeptical campaigner about naturopathy, and former speaker at our QED conference. You may not be aware, however, that Britt is currently being sued for defamation.

Britt used to be a naturopath herself, but she now spends a lot of time and effort exposing naturopathic practices, including on her blog “Naturopathic Diaries”.

She’s been taken to court in Germany by US-based naturopath ‘Dr’ Colleen Huber, who is claiming that Britt has defamed her on her blog. Huber is a critic of chemotherapy and radiation therapy in cancer treatment. Instead, she uses ‘natural’ therapies that include intravenous infusions of vitamin C and baking soda.

The international skeptical community is concerned that the case against Britt may have the effect of silencing a major campaigner against unproven and disproven ‘medical’ practices, through the imposition of considerable legal costs.

Who has the facts and the backing of the medical establishment?

In short, Britt Hermes does.

To illustrate that point, here is a posting from the website “Science Based Medicine” from last September that was written by Dr Stephen Novella, a clinical neurologist and assistant professor at Yale University School of Medicine. It explicitly backs up everything that Britt is saying about Naturopathy cancer quackery. He points to what the clinical evidence says, what Cancer UK says, and what the Mayo clinic says – the treatments being offered by Ms Huber is indeed quackery that does not work. He also pulls apart Ms Huber’s published study that claims success and points out what is wrong with it.

This is not about Ms Huber being a wronged individual fighting back with facts. Instead this is a case of quackery attempting to use the law to gag and stifle valid fact-based criticism so that innocent victims can continue to be conned.

The Australian Skeptics have set up a fund-raising campaign

It need not be much. Imagine meeting Britt and sitting down over a cup of coffee for a brief chat. With that image in mind, why not donate the cost of a cup of coffee on a monthly basis to help out.

Below is Britt’s latest posting. I’m reproducing it is full so that you can read all the details directly from her. Everything below this line is Britt’s …

I need your help: naturopath Colleen Huber is suing me

Arizona naturopath Colleen Huber is suing me in Germany for defamation over my opinions about her so-called natural cancer treatments and research. The lawsuit was filed in Kiel, Germany (where I live) on September 17th, 2017. This legal action came four weeks after Huber’s lawyers sent me a cease and desist letter that demanded I remove a blog post about Huber and pay Huber’s legal fees. My lawyer responded that allegations laid out in the letter were not correct and therefore, I would not comply. I believe Huber is attempting to stifle my right to freedom of speech with this SLAPP (strategic lawsuit against public participation).

I am fighting this lawsuit with representation by Dr. Daniel Kötz of Kötz Fusbahn Rechtsanwalte in Düsseldorf. His law firm specializes in copyright and media law and intellectual property. Dr. Kötz is the only European member of the First Amendment Lawyers Association. He was recommended to me by Marc Randazza, a prominent First Amendment attorney in the United States.

I need your help: a legal defense fund

I am humbled that the Australian Skeptics, Inc. is organizing an international fundraising campaign to help with my legal costs. If you are interested in donating, please go here.

I will not receive any funds directly. All fund disbursements will be made directly to my lawyer, based on detailed invoices. If, due to the public’s generosity, more funds are collected than required to cover legal costs, the remaining funds will be donated to Sense about Science or put into a general Skeptics legal defense fund.

I will not let Colleen Huber suppress my right to freedom of speech.

Who is Colleen Huber?

Colleen Huber is a naturopathic cancer crusader and owner of Nature Works Best (NWB) naturopathic cancer clinic in Tempe, Arizona. She is not a medical doctor and, to the best of my knowledge, has no formal training in cancer research. Yet, Huber promotes herself as a cancer expert (here, here, and here) and is an outspoken critic of standard-of-care treatments for cancer. She wrote that “conventional treatments (chemo, radiation, etc.) sicken and weaken you and ultimately strengthen the disease.”

Huber treats cancer using alternative therapies, including intravenous injections of vitamins and baking soda. She staunchly advocates that her cancer patients should follow a strict sugar-free diet. She advertises that a sugar-free diet increases a cancer patient’s overall survival, regardless of cancer stage or type.

Huber has made other incredible claims that are worth scrutinizing:

No other clinic, of any kind, has such a high documented success rate (source)

Learn about out 90% success rate (source)

Huber is also the founder and president of the Naturopathic Cancer Society (NCS), which is a non-profit organization with the same address as her clinic that raises money for cancer patients to pay for naturopathic care. In 2017, the charity promoted cancer treatments offered by Huber’s clinic on twitter.

Huber’s clinic solicits donations to help patients pay for naturopathic cancer care. Sponsors can give in the amounts of $1000, $5000, and $25,000, although the links for actually donating money don’t seem to work. The web page does, however, direct donors to Huber’s charity, NCS. This page is currently active on the NWB website and was up throughout 2016.

I blogged about Huber’s cancer treatments and research after I discovered that domains in various versions of my legal name were purchased by an anonymous party in early 2016. I found that one of these, a “tribute” website formally hosted at BrittMarieHermes.com, was registered to a Wix account with an email address at the domain natonco.org, which is the website for Huber’s charity.

The basis of the lawsuit

The lawsuit centers around my blog post, Is dubious cancer “doctor” Colleen Huber cybersquatting my name?, from December 1st, 2016. Huber alleges that the following statements are defamatory (underlined sections are at issue):

1. “In addition to what appears to be a terrible failure in conducting ethical research because it was/is run out of her clinic and tied her non-profit, Huber completely bungled her analysis. Thomas Mohr, an oncology researcher at the Medical University of Vienna, reanalyzed Huber’s data in her sugar study and commented on my blog in February 2016:

Putting aside the ethical issues of the extremely bad study design, the lack of ethics committee approval or patients’ agreement, a quick n’ dirty analysis of the data reveals following odds ratio: 2.1 (95% CI 1.01 – 4.40, p<0.05) in favour of state of the art treatment. In other words, patients under natural care have more than a two-fold higher risk to die.

2. “Mohr continued with his independent analysis of Huber’s data:

If one removes data of questionable quality and takes into account only those with complete data and in treatment resp. died during treatment (i.e. in remission, not yet in remission, died), the odds ratio gets almost 10:1 in favour of state of the art therapy. This is really nasty.”

Indeed, her activities seem suspicious, especially when one looks at what her clinic is advertising based her “research.”

Colleen Huber, NMD appears to be a cancer quack.”

3. “Huber and these other naturopaths have perhaps found a legal loophole allowing them to blatantly mislead vulnerable cancer patients. She seems to be drawing naturopaths into what looks like an IRB sham in order to justify the use of fraudulent treatments. In reaction to my April 2015 post for Science-Based Medicine, Huber’s naturopathic IRB has stopped publishing complete transcripts of their minutes. I can only assume that ANRI/NORI is continuing to butcher the IRB process in order to uphold the naturopathic scope of practice, rather than the safety and well-being of cancer patients. As far as I can tell, Huber is the ringleader of what appears to be a naturopathic clinical trial and charity hoax.”

Each of the above statements is my opinion, which is based on my readings of online writings by Huber and her associates, as well as Huber’s so-called “research” published in seemingly predatory journals.

I find this lawsuit to be outrageous. I am afraid it will be costly. My husband and I are PhD students with low incomes. Perhaps Huber is trying to bully me, as she likely has substantial financial resources from her naturopathic cancer business.

Your generous donations will help me defend against this legal thuggery.

Thank you to Eran Segev for taking the lead on the fundraising effort, along with Alethea Dean and Tim Mendham of the Australian Skeptics, Inc. Thanks are also due to the numerous collaborators and supporters, especially members of the fundraising advisory committee: Michael Marshall from the Good Thinking Society, Steven and Jay Novella from The Skeptics Guide to the Universe, and Claire Klingenberg from the European Council of Skeptical Organisations (ECSO).

And of course, thank you to my readers. You all helped me find the courage to share my voice during a very difficult time in my life as I extricated myself from the naturopathic profession. Your continued encouragement and support has helped me become a better scientist, a better critical thinker, and a better person.