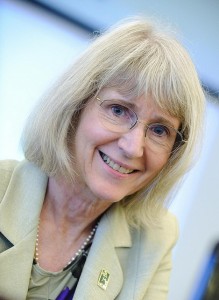 The Guardian announces that Dr Eugenie Scott (pictured), who is the director of the National Center for Science Education, has been awarded the 2012 Richard Dawkins Award for her tireless promotion of science education.

Yes indeed, this is very well deserved, I’ve had the privilege of meeting her and also hearing her talk several times. She is an anthropologist and also a former university professor, but is now the executive director of the National Center for Science Education, and received this award at the Atheist Alliance of America’s annual meeting, held in Denver Colorado, on 1 September 2012. She is widely considered to be a leading expert on creationism (including intelligent design), and one of its strongest opponents. Her book Evolution vs. Creationism: An Introduction was published by Greenwood Press in 2004 and then in paperback by the University of California Press in 2005.(It has a foreword by no less a person than Niles Eldredge himself). She also  jokes that she sometimes thinks her first name is “Atheist” for the frequency with which she is referred to as “Atheist Eugenie Scott” by creationists. In 2005, Scott and other NCSE staff served as scientific and educational consultants for the plaintiffs in the Kitzmiller v. Dover Area School District case, which originated in Dover, Pennsylvania. It was a big win for science, Judge John Jones ruled against teaching intelligent design or creationism in the public schools as science, because the ID folks were unable to produce one jot of scientific data to verify their daft claims.

Regarding the award, the Guardian notes …

Dr Scott, a prominent critic of young-Earth creationism and intelligent design, was given this award in recognition of her tireless promotion of science education.

“I now possess awards in the names of both Stephen Jay Gould and Richard Dawkins”, joked Dr Scott at the beginning of her acceptance speech, referring to the famous scientific conflict between the late Dr Gould, a paleontologist, and Dr Dawkins, a geneticist, about the mechanics of evolution.

“This demonstrates that I can get along with everyone.”

Dr Scott then added: “Regardless of my historic amiability, however, I do not anticipate ever being presented with the Ken Ham award, if such exists.”

Least you wonder about that last comment, Ken Ham is a well-known creationist kook, who is building a full-sized replica of Noah’s ark, and also asserts that the ark contained dinosaurs. 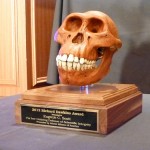 Here (pictured) is the award presented. Since she is an anthropologist, the award is imitation of a fossil, an Australopithecus afarensis skull” to be precise … cool. Previous  recipients of this award, include Penn and Teller, Susan Jacoby, Julia Sweeney, Daniel Dennett, Ann Druyan, James Randi, and Christopher Hitchens.

This is the video presentation of the 2012 Dawkins Award to Dr Scott by Richard Dawkins:

Finally, if you have no idea who she is, then here is a clip of her speaking at TAM 2012 in the US not too long ago ..