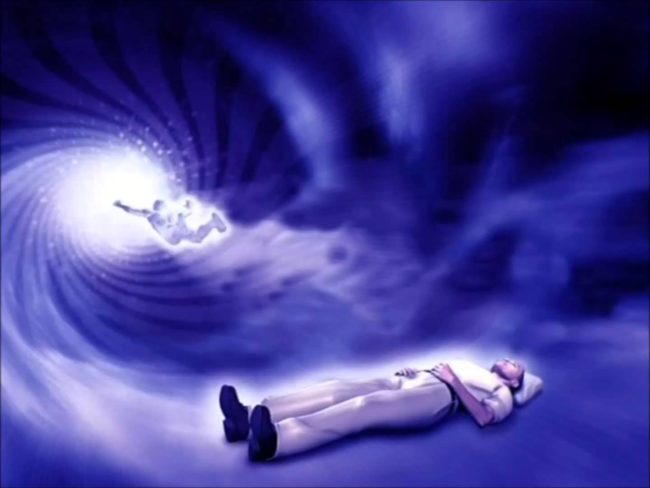 During this last weekend I listened to psychologist Susan Blackmore recount to a packed audience at QEDcon her Out-Of-Body experience that occurred when she was a young student at Oxford back in the 1970s. At that time she ran the Oxford University Society for Psychical Research (OUSPR). Was this experience proof that beyond our reality is another deeper reality?

At that time she was personally convinced that it was, and that the paranormal was quite real.

Not trusting my own ability to accurately recount her precise description, I googled a bit and found a 1987 article that she wrote for The Skeptical Inquirer back in 1987. The QED talk will eventually be available on YouTube and so I can perhaps pop a link to that into this post as an update once it is out. When writing back in 1987, she briefly described it as follows …

I had an experience that was to have a lasting effect on me—an out-of-body experience (OBE). It happened while I was wide awake, sitting talking to friends. It lasted about three hours and included everything from a typical “astral projection,” complete with silver cord and duplicate body, to free-floating flying, and finally to a mystical experience.

It was clear to me that the doctrine of astral projection, with its astral bodies floating about on astral planes, was intellectually unsatisfactory. But to dismiss the experience as “just imagination” would be impossible without being dishonest about how it had felt at the time. It had felt quite real. Everything looked clear and vivid, and I was able to think and speak quite clearly.

At the time, her friend was able to talk her through it, and managed to persuade her to go flying up over the city. She made a point of looking down to make a mental note of what she saw so that she could then check it all later and verify it.

The experience itself changed her life. It motivated her to prove it all and so she embarked upon a career in which she investigated and studied the paranormal.

So what happened, did she find good evidence that the supernatural was real?

Writing about it all within a New Scientist article dated 2000, she explained how that panned out …

It was just over thirty years ago that I had the dramatic out-of-body experience that convinced me of the reality of psychic phenomena and launched me on a crusade to show those closed-minded scientists that consciousness could reach beyond the body and that death was not the end. Just a few years of careful experiments changed all that. I found no psychic phenomena – only wishful thinking, self-deception, experimental error and, occasionally, fraud. I became a skeptic

Having come to that conclusion she then put it aside, moved on, and worked upon memes, hence she is perhaps better known for that work via her book The Meme Machine. That conclusion however was not the end of her OBE (Out of Body Experience) story, because she went on to explain to us last Saturday that back in 2002 something dramatic happened that made her appreciate that she had not thrown out all her old research notes and books.

There they describe the astonishing discovery. Via the electrical stimulation of a very specific part of the brain they were able to repeatedly induce out-of-body experiences. They described it as follows …

Out-of-body’ experiences (OBEs) are curious, usually brief sensations in which a person’s consciousness seems to become detached from the body and take up a remote viewing position. Here we describe the repeated induction of this experience by focal electrical stimulation of the brain’s right angular gyrus in a patient who was undergoing evaluation for epilepsy treatment. Stimulation at this site also elicited illusory transformations of the patient’s arm and legs (complex somatosensory responses) and whole-body displacements (vestibular responses), indicating that out-of-body experiences may reflect a failure by the brain to integrate complex somatosensory and vestibular information

This was a fascinating discovery and opened up an entire new area of research on in all, and so once again it was game-on for OBEs for Susan Blackmore.

While listening to some of the other talks, Susan was sitting beside me and offered interesting observational comments on them. At one point the person behind us was was constantly poking around in a plastic bag (similar to somebody perhaps eating a bag of crisps type of noise) and making a bit of a distraction. Normally humans tend to cut out such distractions and ignore them, and while she did not say anything, it was clearly cutting into her focus on the talk.

Why is that relevant?

During her OBE talk she put up an image that was an abstract optical illusion and explained how she, like some people are, was personally sensitive to it because it cut right though her head when viewed. One area of interest to explore is to find out why some people who have such sensitivities are also prone to having an OBE.

The fact that there is such a correlation is itself quite fascinating.

You can actually simulate some of this yourself. To illustrate that, Susan talked about the Rubber Hand illusion, then proceeded to give us a practical demo.

The Rubber Hand illusion is where a part of somebody else or something else is perceived to be you. It works as follows …

If curious, you can read more about it all here.

You can perhaps set it up and try it yourself at home.

Taking that a bit further, Susan got some volunteers and did something similar on stage for us.

So basically the idea is to take the rubber hand example and apply it to the whole body. You set things up such that you see your front being rubbed, but actually feel it on your back and this then creates the illusion of your entire self going backwards out of your body. You can perhaps have a very effective variation of this with VR headsets and cameras.

The point is this, it does not take too much to mess with your body perception by fooling your brain’s visual input.

In the time since her first Out of Body experience, our understanding that this is not in any way supernatural or paranormal has grown considerably.

As is often the case, the answers we now have lead to even more questions. Why does stimulating a specific region of the brain lead to such experiences, and why are some more susceptible than others?

You might also be curious to know if after her OBE in the 1970s she went out to check on what she had seen and compare it with reality. She did exactly that and discovered that what she had seen was different than the actual reality of the rooftops over Oxford. Others who have OBEs often report something similar, but such an observation does not cause those who deeply believe it is paranormal to doubt, and instead opt to rationalise it away by suggesting that the astral world is not exactly aligned with our world, hence is different. The observation that people do this is in itself quite fascinating and perhaps warrants a separate area of research to understand why some people permit emotional investments in some ideas to trump facts by dreaming up explanations for any conflicting data.

I should perhaps also add that it is important for us to understand that those who do truly believe are not being either stupid, gullible, delusional, or crazy. The experience itself does indeed happen, and for those who experience an OBE it is quite real and sometimes very frightening. Being a skeptic is not about dismissing things that we do not understand, instead it is about exploring what is happening and seeking out the truth.

Coming to terms with the knowledge that you are wrong can be very very hard. Susan Blackmore expanded upon that within her 2000 New Scientist article …

Admitting you are wrong is always hard, even though it’s a skill every scientist needs to learn. And starting again as a baby in a new field is a daunting prospect. So is losing all the status and power of being an expert. I have to confess I enjoyed my hard-won knowledge. Yes, I have read Michael Faraday’s 1853 report on table tipping, and the first 1930s studies in parapsychology, and the latest arguments over meta-analysis of computer-controlled ESP experiments, not to mention the infamous Scole report (Feedback, New Scientist, 22 January). Should I feel obliged to keep using this knowledge if I can? No. Enough is enough. None of it ever gets anywhere. That’s a good enough reason for leaving.

But perhaps the real reason is that I am just too tired – and tired above all of working to maintain an open mind. I couldn’t dismiss all those extraordinary claims out of hand. After all, they might just be true, and if they were then swathes of science would have to be rewritten.

Another “psychic” turns up. I must devise more experiments, take these claims seriously. They fail – again. A man explains to me how alien abductors implanted something in his mouth. Tests show it’s just a filling, but it might have been…

No, I don’t have to think that way. And when the psychics and clairvoyants and New Agers shout at me, as they do: “The trouble with all you scientists is you don’t have an open mind”, I won’t be upset. I won’t argue. I won’t rush off and perform yet more experiments just in case. I’ll simply smile sweetly and say: “I don’t do that any more.” – Susan Blackmore