The news from Egypt is not good … aljazeera reports here …

There’s been a surge of commentary under the #FreeAlaa hashtag on Twitter, as activists condemn the trial of the renowned blogger and activist, Alaa Abd El Fattah.

Abd El Fattah is being charged on 12 counts, including – as of a court hearing today, the Egyptian website Shorouk News reported  – “premeditated murder for the implementation of an act of terrorism”. His case was transfered from a military court to a civilian one on Sunday, paving the way for today’s new charges.

The military accuses the blogger of inciting violence on October 9, in what has become known as the Maspiro massacre.

Abd El Fattah and other activists, however, say they are being used as scapegoats, and that the military should not be in charge of an investigation of a case in which its own forces are involved in the killing of at least 27 people, and the wounding of more than 200.

A list of accusations against Abd El Fattah by the authorities can be seen here, as reported by Shorouk News (in Arabic).

His wife and fellow blogger, Manal, is due to give birth in the coming days, but her husband will most likely still be behind bars.

My initial worries regarding Egypt making the leap from a dictatorship into an Islamic dictatorship, instead they appear to be sliding into a military dictatorship. 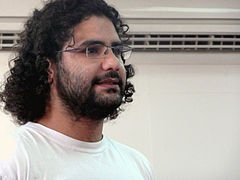 Now least you wonder who? I’ll explain. Alaa Abdel Fattah is an Egyptian blogger, software developer, and political activist, known for co-founding (along with his wife Manal) the Egyptian blog aggregator “Manalaa” and “Omraneya”, the first Arab blog aggregators that did not restrict inclusion based on the content of the blog. (Yes thats a picture of him on the left).

The latest events are not his first stance for freedom, because back in 2006, he was arrested during a peaceful protest after he called for an independent judiciary. His arrest, along with that of several other bloggers and activists, spurred solidarity protests by others around the world that led to his release 45 days later.

His current plight came about when he was tossed into jail after refusing to be interrogated by the Military Prosecutor, in protest against its legitimacy. This all related to protests on 9th Oct when 28 protesters were killed. So what we had were Military Trials for Civilians, but to avoid that criticism, then have simply put him into a non-military court – and yet we all know who is really pulling the strings here … the military.

The UN Commission for Human Rights has called for the release of Abd El Fattah and all others imprisoned for exercising free speech. Mubarak might be gone, but the political machine remains, but with the elections now happening, well perhaps we can still hope, but right now the plight of Abd El Fattah is a truly dark shadow.